Christmas – it comes earlier and earlier each year. And arriving earlier alongside it is that time-honoured tradition that me and mine call CCP season. CCPs, not to be confused with The Chinese Communist Party are Cosy Christmas Pints. Though sharing many similarities to normal pints, Cosy Christmas Pints have several unique defining characteristics which set them apart. These are as follows:

So, with the above in mind, we wanted to just throw out our top five Christmassy Dublin pubs for 2022. Pubs that really suit the CCP season and are always worth a look around this time of year.

Starting with what is maybe a less obvious one – J O’Connell’s makes it into our list for somewhat personal reasons. We tend to find we always get up to Portobello in the run-up to Christmas for a look at the pub and we’re not exactly sure why. It might be that the pub’s name is identical to the one featured in the Guinness Christmas ad, or maybe it’s the glossy green and red interior design. Most likely it’s just the fact that O’Connell’s is just an out-and-out great pub. 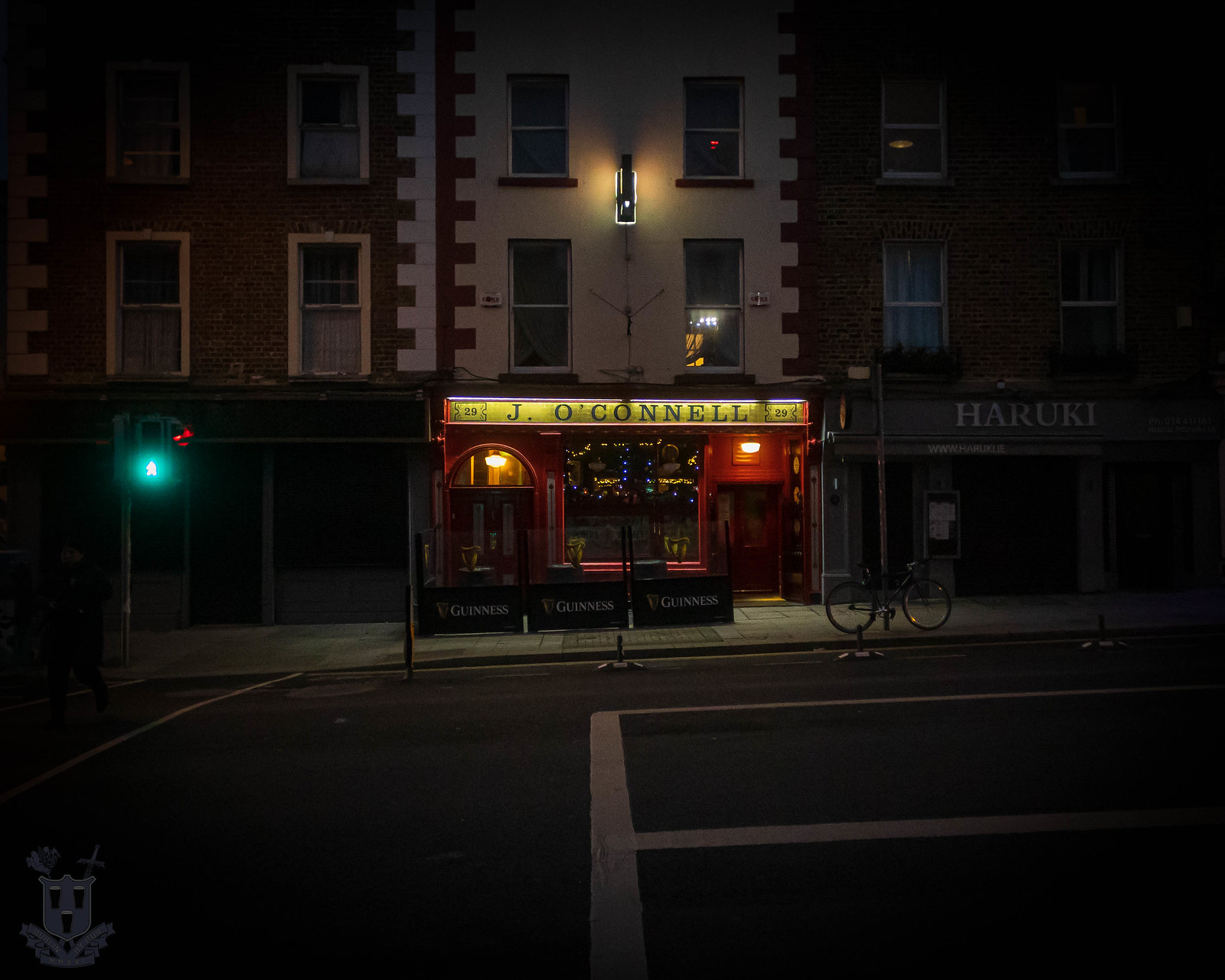 Named after author J.P Donleavy’s magnum opus – The Gingerman – I often wondered why the pub doesn’t seasonally rename itself for another of Donleavy’s books – the one that inspired Shane McGowan when he came to title what would come to be his most famous song – A Fairytale of New York. It would be an apt name, given that the place gets what can easily be described as the most intensive Christmas makeover in the city centre each year. 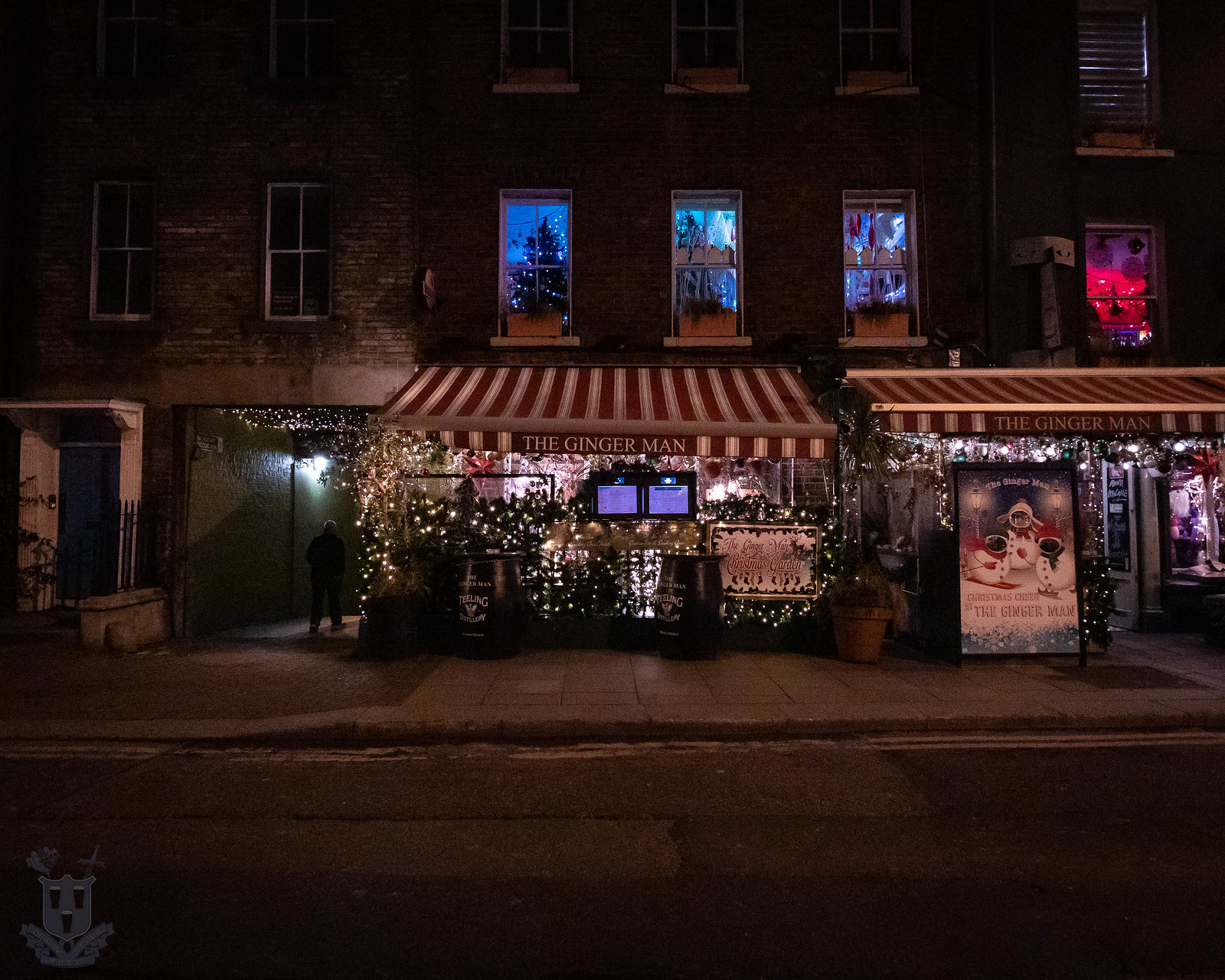 The Oval don’t go anywhere near as heavy on the decoration as The Gingerman but they make the cut due to their proximity to ground zero of Christmas Shopping mecca. When you’re wading through the street sellers on Henry Street as they bellow their wares into your ear or as you sit in a queue of dozens for some trendy outlet in Arnotts, you know that you could be sat in The Oval with a pint and a Hot Whiskey quicker than you could say ‘Can I get a gift receipt with that’. 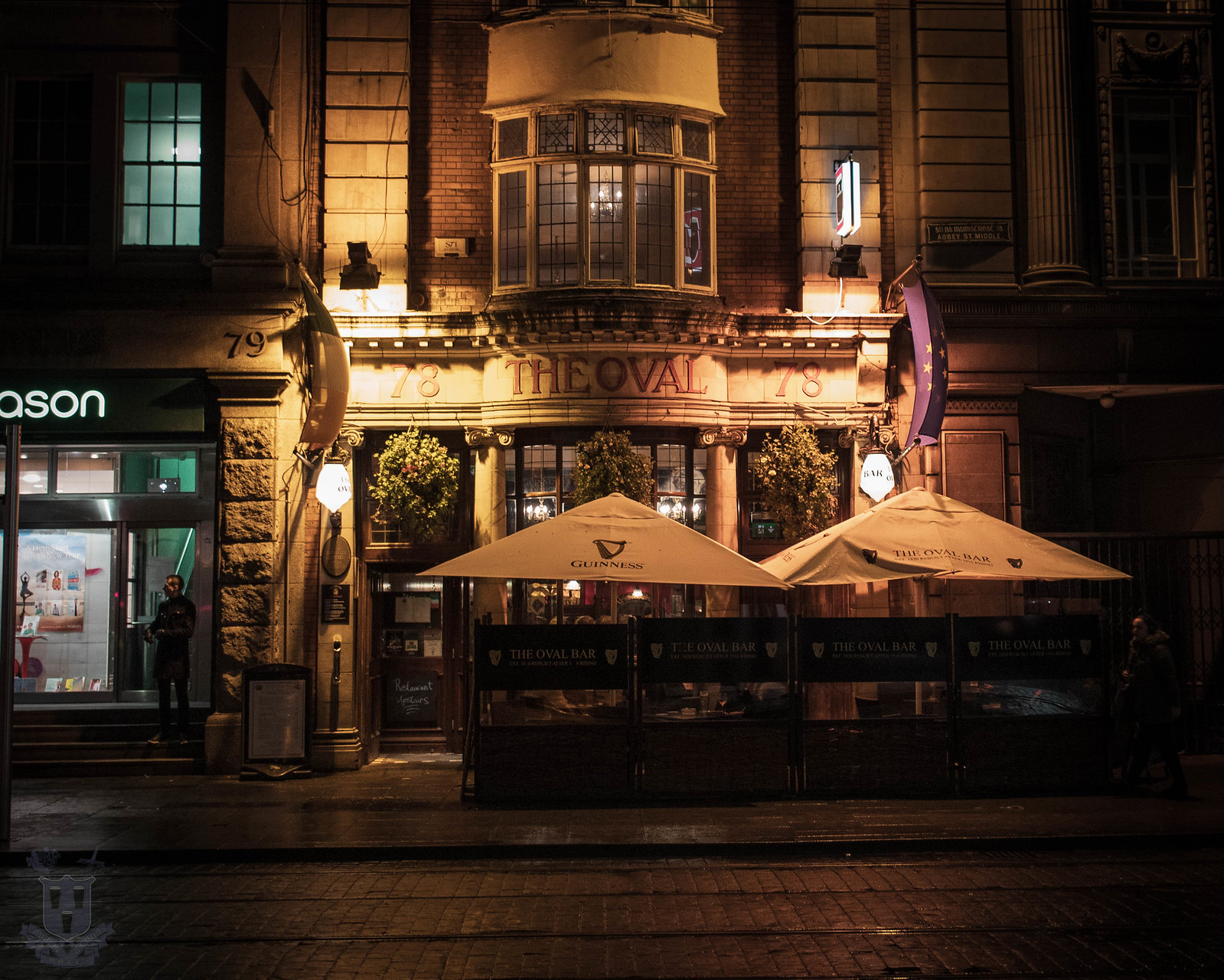 The Hole in The Wall.

We’re often at pains to remind people that this is a blog primarily focused on pubs in Dublin City Centre, but it would be remiss of us to not include The Hole in the Wall, the Phoenix Park-adjacent pub, which is the longest in Ireland, festoons its entire length in Christmas bric-a-brac every year. It really is a sight to behold. 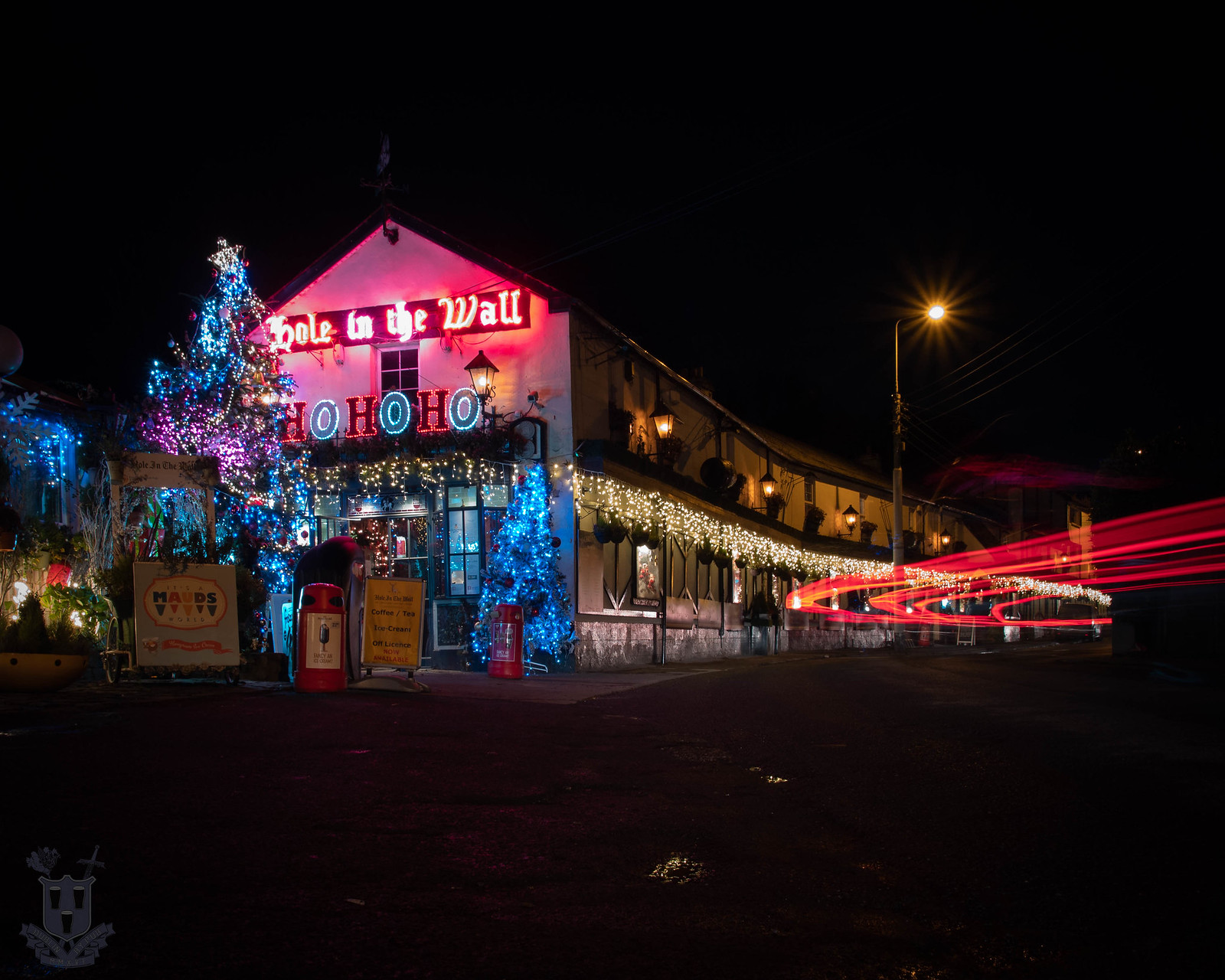 The Bankers makes our list for something similar of a reason as The Oval does – call it the Southside Oval: it being on the fringes of the Grafton St shopping area (note: we didn’t say Grafton Quarter). Honestly, though, there is little else in the city around this time of year that’s cosier than being sat, at ease, in the window of The Bankers peering through the lights in the window at all the stressed-out shoppers, weighed down by bags as they hurry to and fro up and down Trinity Street and Dame Lane. All while you’re safe in the knowledge that you won’t have to worry about any of this until the 24th. Besides, what sort of a druncle would you be if you arrived up with the actual gift. They’ll have more craic going in to buy it with the voucher in January themselves anyway. 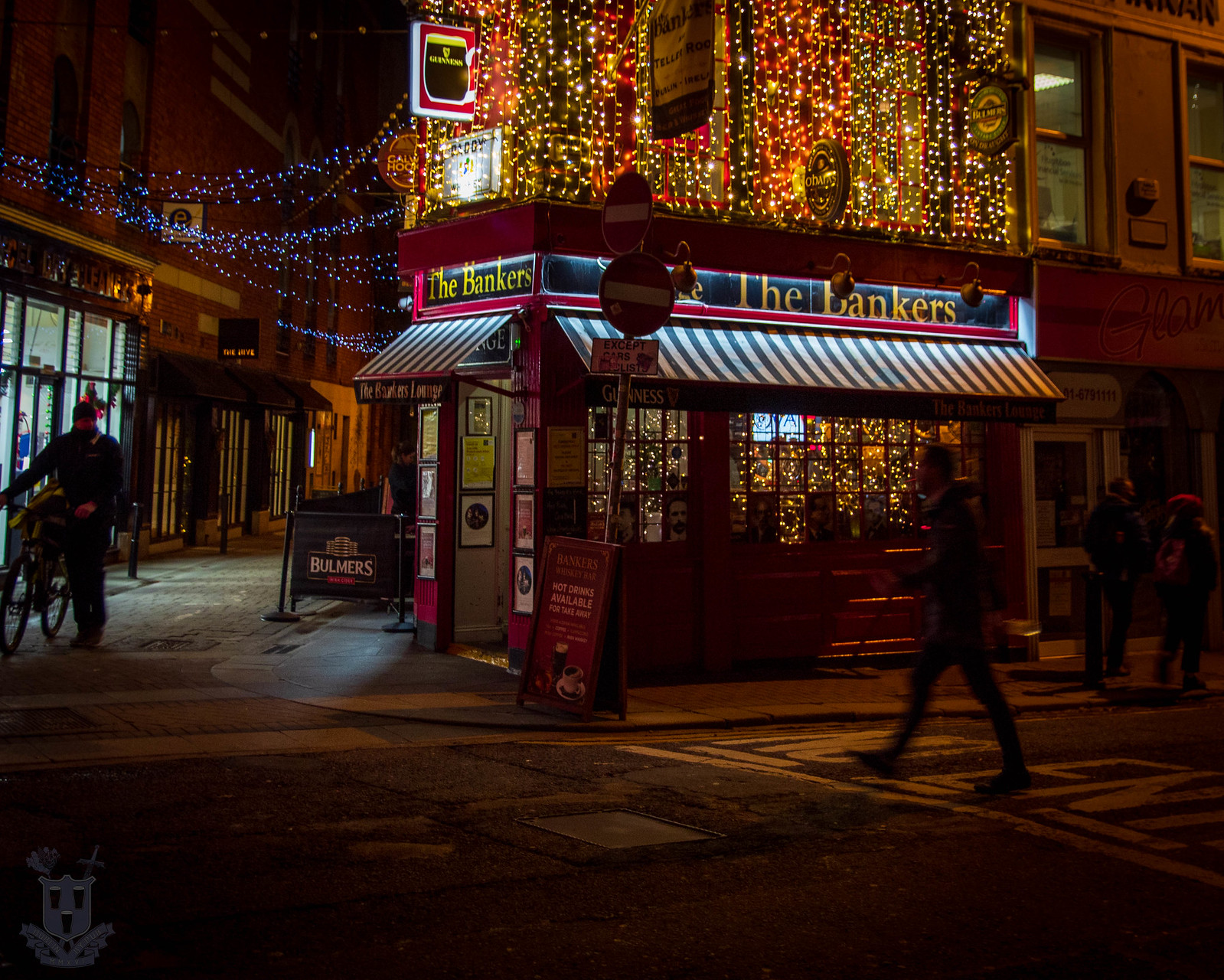 That’s our Christmas pub list for 2022, anyway. Do leave a comment and let us know if you plan to visit any on the list, or if we missed any.

We do hope you get into the pubs and experience them for yourselves. Honourable mentions for The Palace and The Strawberry Hall (which is incredibly Christmassy, but just a disaster for us non-drivers on the east side of the city to get out to).

Wishing you all a wonderful and safe CCP season ahead folks. Remember to keep enough money for the presents and do try and add your bartender into the odd round too, they do a fine job keeping us all well-oiled throughout it all.

An Afternoon in The Palace Bar
Scroll to top