January… It’s tough going! The dark misery of winter’s icy grasp persists and the anti-climax of Christmas’s end kicks in. Advertising media reminds you of the upheaval you’ve caused to your general health and the workplace is abounded with incessant mundane tales of ‘nice quiet’ Christmases. All in all, a fairly brutal month. But January is good for at least one thing – introspection. And it’s in this spirit we’ve decided to upgrade one or two pubs posted on Instagram during DublinByPub’s infancy to conform to our more established format. 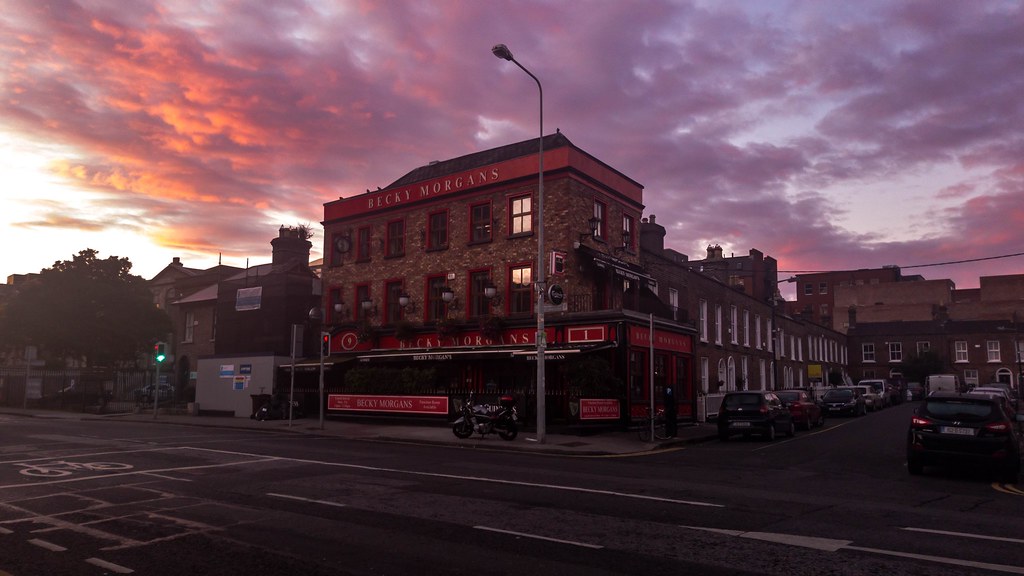 Becky Morgan’s is just about within our city boundaries sitting a literal stone’s throw from The Grand Canal. The building strikes a distinctive chord amongst neighbouring buildings with its rosy red signage.

It’s a small enough pub on the inside, one where prospective punters should forego shyness if they visit during the pub’s peak hours as they may need to squeeze in beside one stranger or another to take the load off. When we last visited, a local lad scooched across at the bar to accommodate us before giving us a detailed overview and analysis of his day’s gambling. The bar itself is a well presented setup – uniform taps pour a decent range of beer for such a compact boozer, there’s also spirits aplenty behind the bar too.

The seating is well thought-out with space at the bar and low tables running parallel to the bar along the circumference of the room. The pint was of good standard and a nice price to boot. We were in around Christmas time and the staff were well capable of keeping up with the seasonal rush without any impact on quality.

So whether it’s on the way to a wedding in the nearby registry office, or up to Lansdowne Road for a match, or just for a causal scoop, we’d happily recommend you drop into Becky Morgan’s at your earliest convenience.