As you move away from Thomas St. and make your way toward Dame St you will likely find yourself wandering past a noticeboard. Upon this noticeboard, there is a crudely painted heading which reads: ‘Upcoming Events’. As you continue to read, you’ll find no less than six events listed in equidistance below the heading and painted in the same crude manner, yet smaller. Beer, beer, beer, beer, beer, beer. This may well be your first encounter of The Beer Market – a pub that sits on that buffer zone between The Liberties and Town, known as High St. 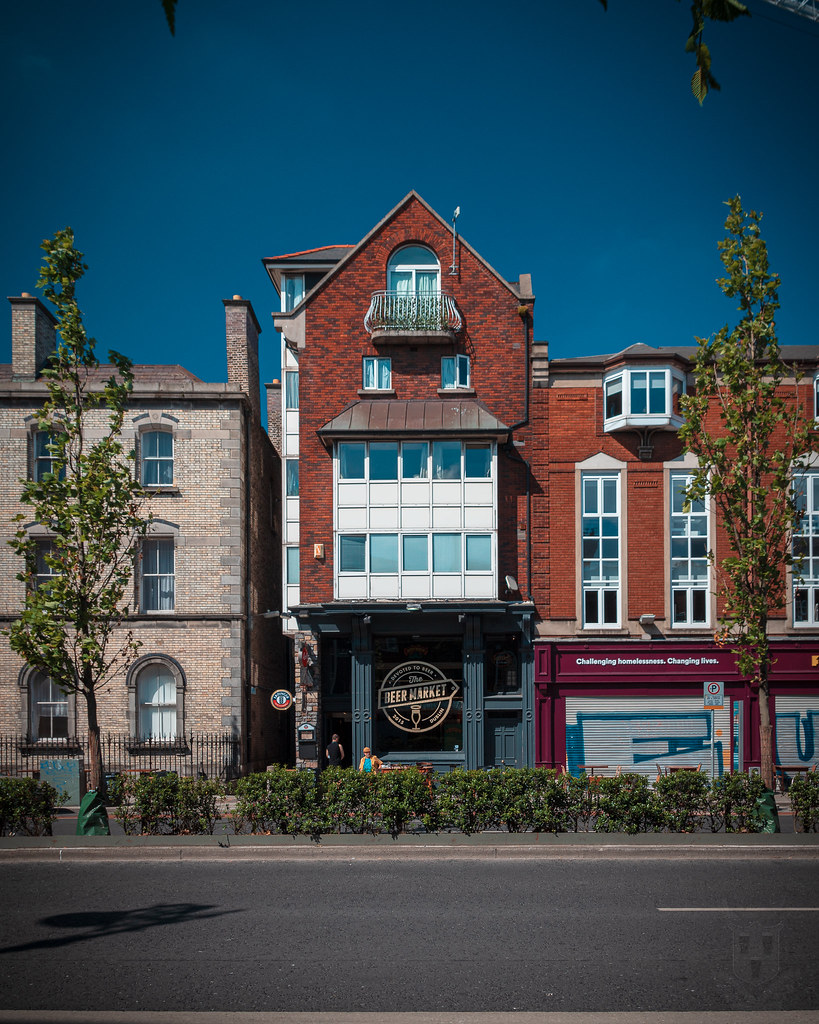 The Beer Market is one of the ever-growing number of Galway Bay Brewery (GBB) Bars that have begun to proliferate throughout Dublin over the last few years. With a veritable myriad of beers on offer, both by the bottle and from the twenty taps behind the bar, there’s absolutely no denying that this is a pub which is more than aptly named – beer is most certainly the focus here.

As a whole, the pub is set on three separate mezzanine-like floors that zig zag to one another. The main bar is placed in the middle of these three floors and is a relatively small space. Compounding the diminutiveness of this middle room is what Pintman Nº2 and I categorized as one of the largest pub tables in Dublin. The unnecessarily large table, which sits in the centre of the room, comes complete with a hollow in the centre – for those all-important board games, and takes up 40% of all available space in this section, easily.

Given the above, and unsurprisingly enough, we opted for a seat at the bar where I happened upon a small design flaw that irked me enough to include it here. Presumably, due to the dynamic nature of the range offered by The Beer Market, taps are marked with numbers instead of the usual branded disc you’d find in most other pubs. In order to identify what pours in any given tap you need to check the corresponding number on a board – this sits above the bar and annoyingly is outset from the boundary of the bar itself. Call me lazy if you want, but having to get up off my stool and take those two or three paces back just to pick what I want to drink for each round is something that impacts my drinking experience negatively. For the little details, an experience, make.

The top section of the pub is easily the best. Large windows complete with a ledge offer prime people-watching real estate – some of the best in Dublin. Ultimately though the vibe of the place is pushed away from our liking with the furnishings. The seating is a particular annoyance – comprising of antique metal and wooden industrial stacking chairs – they bring back memories of some uncomfortable and over-ran school assembly that might have taken place in any given Irish national school between the 1950s and the 1990s.

But all to their own, and just because the boozer’s vibe isn’t to our liking we can’t deny its success. This is a building that has been something of a perpetually failing boozer to our memory – given the volume of times it has changed names (and presumably hands) before GBB had a crack at it, and they’d certainly appear to be going nowhere anytime soon by the looks of things. Aside from all that there is no denying the quality of the beer – I opted not to go too adventurous and get my usual GBB order of ‘Of Foam and Fury’ which is a fantastic DIPA, Pintman Nº 2 went with the house stout – Buried at Sea and drank it with little complaint.

When all is said and done, there is no one that could say that Galway Bay Brewery isn’t capable of running a good boozer. Because they are. And there are a number of their pubs in Dublin that we’d happily spend a good few hours in. Unfortunately, for us though, this isn’t one of them.