At the very outset of this post, I first want to offer you, well – future you and your team, some information that will undoubtedly aid you in answering one of the questions in a pub quiz. The question will centre around the Olympic Games and will most likely ask something along the lines of – in what year were the 2020 Olympics held? And you will know that this is a trick question and that the answer is 2021. All because you came to read the ramblings of this pub-obsessed headbanger. 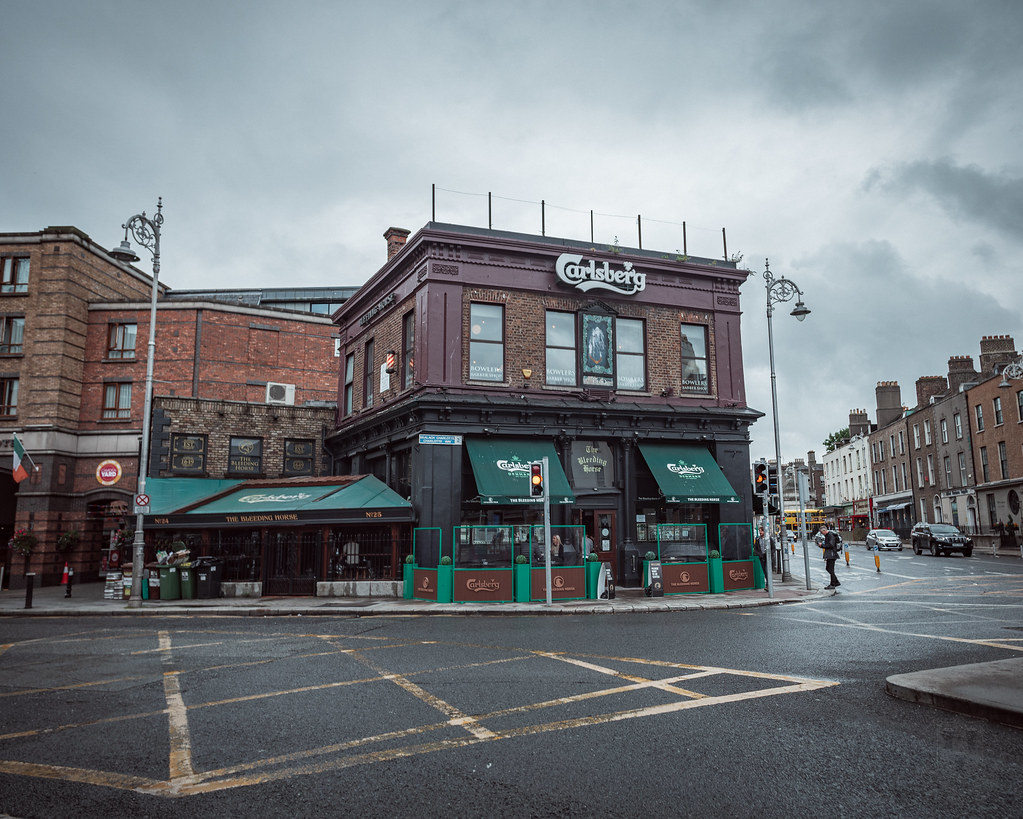 Now, none of this really has any real correlation with the pub about which I intend to speak. But let me be honest with you and admit that this year’s delayed Olympics was the first where a Modern Pentathlon had cause to leave me in thought of a Dublin Pub.

Yes, it was of course in the midst of one of those irksome Monday hangovers when I was putting in the longest of my working hours. I was listening to the radio and heard the far-too-cheery hosts discuss a German Olympian: who had met the ire of the internet when she was found to have punched her horse during the equestrian section of the Modern Pentathlon event. “Was the horse bleeding?” asked the host at one stage. Immediately I was transported to that awkward junction at the top of Camden Street.

A cavernous pub set out on multiple floors, The Bleeding Horse has the distinction of being one of the few Dublin Pubs which retains the name it held prior to the 1872 Licensing Act, which required the proprietor to affix their name to the premises they ran. It should, however, be noted that the pub’s name was changed to The Falcon Inn for a period in the middle of the 20th Century, and having done a bit of archive digging on it, I’ve found that most mentions of the name in the media are to lament it having been changed in the first place – one such article being humorously headlined: What’s bleeding wrong with the old name?

The definitive genesis of the name itself is unclear, though there does seem to be two front-running explanations. The first of these relates to the claim that there was once said to be a farrier on-site at the premises, who would carry out the practice of bleeding horses for supposedly beneficial reasons. And the other, of which there are a number of variants, relates to a riderless horse entering the pub having come from a battle, further afield (some say during the Cromwellian invasion and others say during the United Irishmen’s 1798 rebellion). In each telling of this version of etymology, the horse is said to be bleeding upon entry with some going as far as to say that the horse dies on the floor of the tavern. One of the sources I checked even alluded to the pub being haunted by the spirit of the dead horse and mentions that strange, unexplained noises can sometimes be heard in the pub after close. But this author would argue that this is more likely a result of the kebab shop across the junction.

Pintman №3 and I were recently chatting about The Bleeding Horse and immediately we were in agreement that it was a pub which we both certainly liked. Its abundance of differently shaped, sized, and lit spaces give it a wide appeal and its historical chops are, of course – an advantage. Not only does the pub have age and name at its disposal to pique history gluttons, but it also has plenty of ties to Literature – James Clarence Mangan is said to have frequented the place and it gets a mention in the grandest of Dublin texts – Ulysses. It’s also cited in Donleavy’s Gingerman.

Speaking some more about the place, we did note one feature which we’d mark the pub down on and that was the expanse of the large, centre-located bar. Mulling this over, we compared it to Synott’s of Stephen’s Green – their’s being the most extreme example of over-allocation of bar space. Though we were in agreement that The Bleeding Horse wasn’t that far gone. Naturally enough, after that, chat mutated to talk of large bars in general. We wondered if our unease with them related to some subconscious awareness of longer beer lines and their inherent susceptibility to the production of poorer pints, in comparison to their shorter counterparts.

We also pondered the phenomenon of larger bars not usually increasing the speed at which you could obtain a pint, suggesting that there may be complex mathematics at play behind the scenes there. But that’s definitely one to work out over a pint and with a few betting slips and bookie’s pencils.

The Bleeding Horse really is understated in comparison to some of the pubs in our city, whose owners (or PR agencies) are only too happy to fabricate some bespoke bollocks to tie in with their “image” and sell you sugar-laden, low abv cocktails. The pub is a good one, and an infinitely better choice to drink in over its newest neighbour. And while we can’t speak for the quality or the price of the pint at this minute, given the gap between present times and our last visit, we certainly would have no hesitation in returning to suss this out. And we might just.

Post Script: And just might, we did. A recent visit to the pub gave us the current price (late 2021) of €5.50 for a pint of Guinness, and a more than acceptable one it was too.