A while back in the throes of a decent enough hangover I found myself stuck in an unending cycle of YouTube videos as I awaited some semblance of enthusiasm with which I could use to get up and start my day. In midst of all this, I stumbled upon one of these Ted Talk videos that YouTube is awash with. The video centred on a sole speaker’s travel experiences whereby he had crossed multiple continents with little or no money. I was chatting to someone the other day about our mission on Dublin By Pub and I was reminded of a particular part of this video. The part of the talk I recalled was when the speaker recounted how people would be concerned for his safety when he’d tell them of his plans to hitchhike through different territories, he told of how Serbs would warn him of the dangers in Bulgaria, and how Bulgarians would warn him of the dangers in Turkey and then, in turn, the Turks would warn him about the Kurds, and so on. Now we’re not likening the act of drinking a few pints here and there to a spiritual intercontinental journey but it is interesting to see how people react when you tell them of your visits or intentions to visit certain pubs in certain areas of the city. Summerhill is one such area. 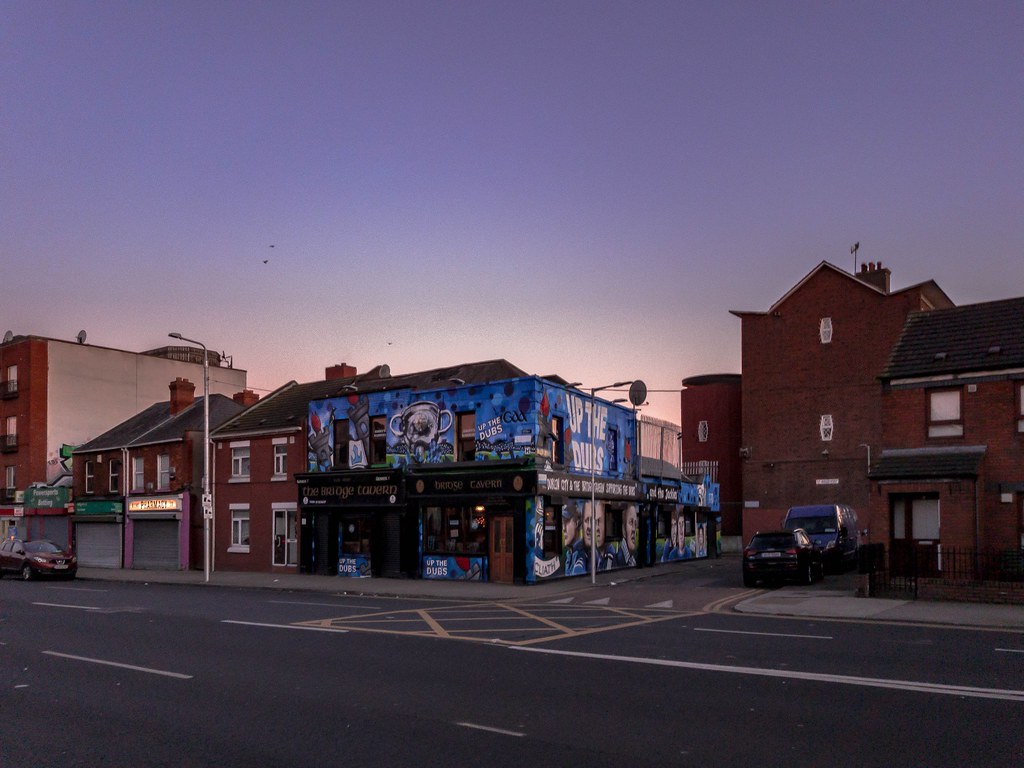 With the forewarning and concern of others in tow we headed down to Summerhill over the autumn of 2017 to sample what the boozers here had to offer, and in The Bridge Tavern we found a bit of a diamond in the rough. First of all it would be remiss of us to not make some mention of Dublin GAA, as the picture shows – this is a pub which fully embraces its proximity to Croke Park Stadium and wears its love for county on its sleeve, and its façade

Inside the pub, the front section is broken into two main atria, with the pub opening up to a larger and brighter section toward the rear. Dark toned woods and tiled mosaic flooring are the most notable features of the structural aesthetic. This, however, is one of these pubs where bric-a-brac rules supreme – the wall and ceiling space is jumbled with all sorts of conversation pieces- these range from images of sportsmen, musicians, actors, historical figures, and most importantly – locals. We always love to see a picture of a deceased local or two in a boozer and speculate on the time, money and liver function one would have to spend in a pub to be considered for such an honour. And please do take this sentiment to form an addendum to our last will and testament – for we would be honoured to adorn the wall of any beloved boozer upon our demise. The Bridge Tavern struck us to be somewhat more liberal around the qualifying criteria given that there appeared to be imagery of locals aplenty across the wall-space of the boozer.

We found the staff in the pub to be of sound order. The customers are well facilitated, particularly the gamblers. We can only postulate that the owner is determined not to be disadvantaged by the absence of an immediately proximate betting shop, but suffice it to say that notes aplenty inform customers of a bet placing service which strictly warn all gamblers to place bets five minutes in advance of the start of a given race. The pint pours well in here, we guzzled a few rounds from new enough tulip glasses which bore the logo of The GAA along with the usual Guinness branding.

So as I harken back to my initial recounting of the Ted Talk lad wandering the earth, I can only reiterate his sentiment. And granted, a pint in Summerhill is no hike across the Eurasian Plain, the same concept applies – and that is not to allow the perceived fears and the prejudices of others become your own, get out and make up your own mind. Jaysis that was fierce preachy wasn’t it? – Dry January can’t end quickly enough!