It seems that the further we wade into our task of boozing around all the watering holes in Dublin city the more and more apparent it becomes to us that the inner-city is an incredibly fascinating place. As far back as the splendour of Georgian townhouses right through the era of slums and tenements, and onwards to council estates, regeneration and whatever else may come, the history of Dublin city’s last few hundred years could almost solely be charted from examining the ebb and flow of the culture and society on inner city streets down throughout the years. Dominick St is one such inner city street. 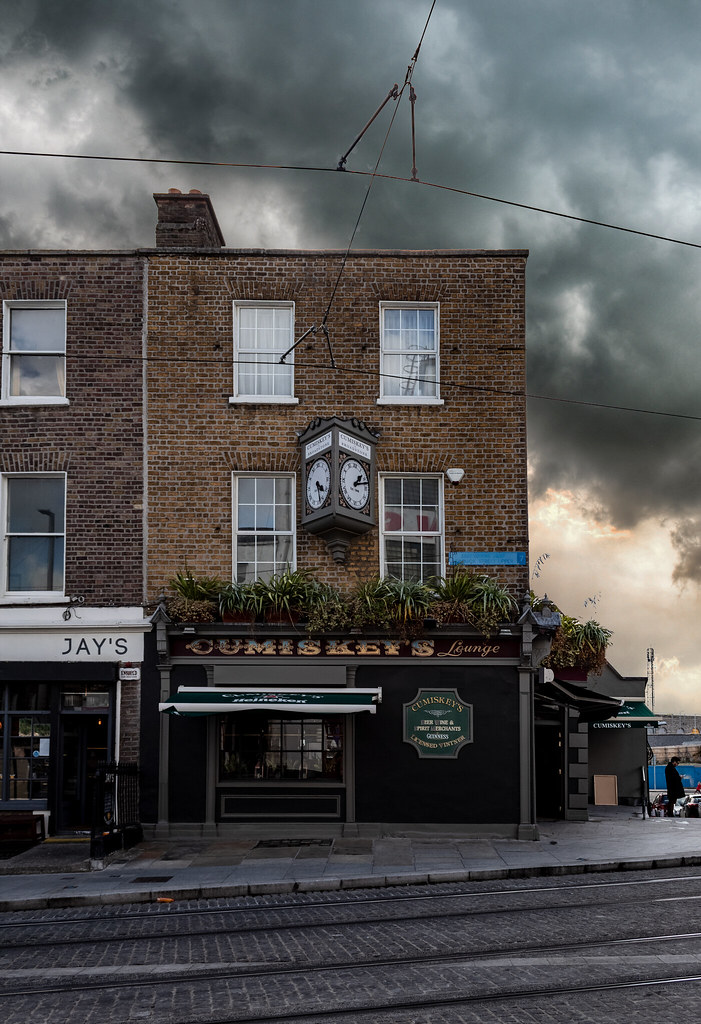 Standing through all those periods aforementioned, and for a good 260 years or so, is No. 41 Dominick Street – a building which now houses Cumiskey’s pub. No stranger to historical events, itself – it’s a structure with plenty of interesting stories to tell if the national archives are anything to go by. Having done a quick search with the address, we were almost instantly onto a webpage listing copies of forms related to applications made by its former occupants to The Property Losses (Ireland) Committee, 1916, in order to ‘Claim for Damages caused during the Disturbances on the 24th April, 1916, and following days’. One particular occupant, a Ms Lizzie Burchill, made a claim for ‘£6 10s for destruction of clothing due to gunfire’ which yielded a determination by the committee that she should receive £3. Another claim was made by Messrs J&J Doyle but was declined by the committee as the gentlemen exceeded the deadline within which their claim should have been made. Thankfully though, it wasn’t all bad news for the lads – at least not for John, who made up one of the two J Doyles. He made a claim for ‘£3 for destruction of silver watch by fire at Hopkins and Hopkins, jewellers, 1 Sackville Street Lower’ and got 2 quid back for his troubles.

Anyway, 100 years on from when Lizzie Burchill and John Doyle were dodging trams on Sackville Street, trams have again returned to the capital’s main thoroughfare and are bringing people right by the front of 41 Dominick St. We, ourselves, recently rolled by and couldn’t resist dropping in to have a look at what sat behind this pub’s alluring exterior.

A smaller-than-expected sort of space, it comprises of two main atria that are connected by a corridor which also happened to house the bar. The northern atrium is the quainter affair of the two and is the one where we chose to park ourselves when last we visited. With soft-yellow embossed wallpaper and royal red velvet couches, we enjoyed two superiorly-poured pints while remarking that the room’s exclusive inclusion of low seating made it a real and proper lounge, in every sense of the word. Familiar ephemera adorns the walls in this section and yours truly was happy enough to be sat under a copy of the proclamation until becoming envious of some other patrons sitting in the corner given what was displayed beside them. Cast in white plaster, the unmistakable likenesses of Luke Kelly and Ronnie Drew gaze out at drinkers who sit in close proximity.

We didn’t spend much time in our analysis of the southern atrium, if we’re to be truthful. As alluded to above, we found to it to be the less formal of the two main sections, if that makes sense. The section you’d be less self-conscious about raising your voice in, y’know? Or so we thought as we made our way through it into the jaxx. Oh and speaking of the jaxx, Pintman  Nº2 reckoned it must be one of the only, or at most one of the few in Dublin with a clear window that looks out into the street… Thankfully away from the more purposeful parts of the room.

Cumiskey’s is a fine unpretentious little boozer and I wish we hadn’t left it so long to finally make a visit there. Next time we go, I’ll be dragging the lads down early to get the seat beside Ronnie and Luke.