It was over a few pints and within the midst of a discussion on the topic of academia that I found myself outvoted by a majority of my peers recently. Having counted yours truly alongside Wilde, Wolfe Tone and other such alumni, I came to realise that considering Trinity College as one’s Alma Mater by virtue of having served a small portion of an ill-fated electrical apprenticeship on-campus is not an act that bona fide Trinity Graduates are agreeable to. This is not even negotiable when coupled with hours clocked up drinking cans on the Green at The Pav or drinking pints in Doyle’s. I suppose we’ll just have to hold out for an honorary degree in the meantime. 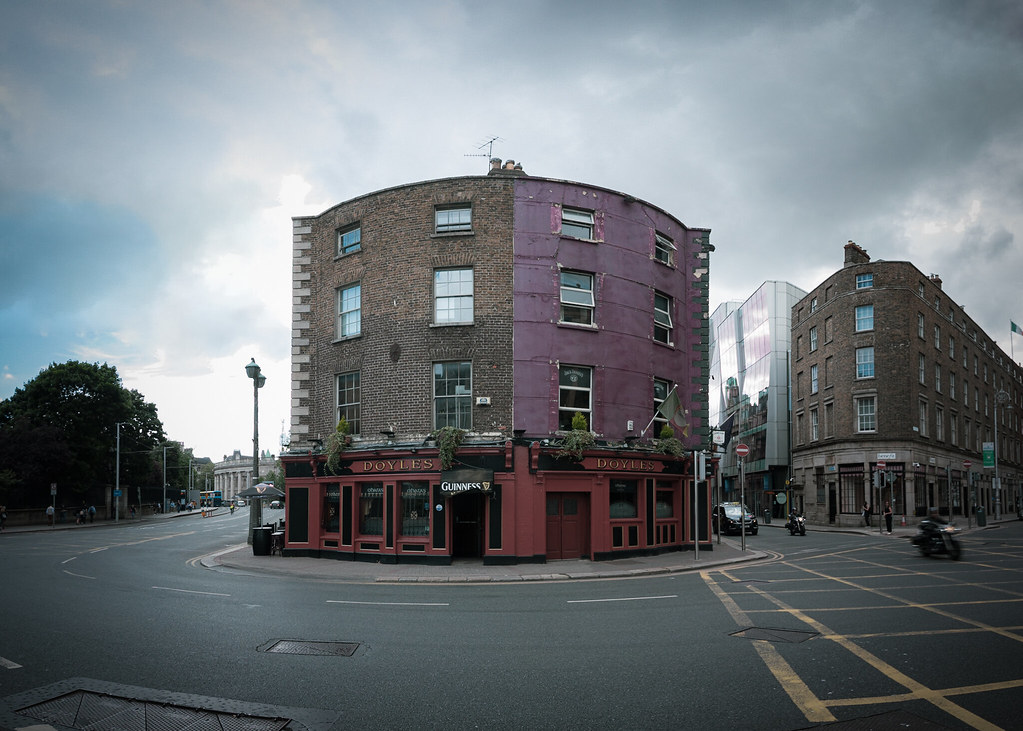 Sitting on the corner of College St. – Doyle’s can sometimes be considered as something of an ad-hoc student bar serving the nearby Trinity College. More a bar with students than a student bar, you can forego the thoughts of sloppy-drunk youngsters nosily gathered around a beer pong table when you come to think of Doyle’s – the place is first and foremost a public house. Traditional in its appearance – it’s decorated in similar tones to average Dublin Pubs throughout town. Dark woods are used for the bar, the floors and the church pew style seating and set the overall look of the pub. The walls display the usual mix of ephemera relating to sport, drinking, music and local history while flourishes of exposed brick and air ducts add a sort of understated rustic charm to the room. The bar itself follows the circular pattern of the pub – wrapping around the curves of the room it leaves no patron more than a couple of metres away from a point of service.

The pint of stout has always hit the mark for us in here and has never given us too much reason for complaint. There’s a decent mix of crafty options alongside the old reliables and there’s usually an offer or two on the go for the students and thrifty postgraduates alike.

All in all we couldn’t fault Doyle’s too much. It’s a pub that facilitated Pintman №3’s tentative foray into the world of pints and pubs and he refuses to view it through any other lens than one that’s heavily tinted with nostalgia. And that’s not to say that the rest of us don’t have our fond memories of the place too – notwithstanding the time the three of us almost came to blows after a disagreement over a question in a Father Ted quiz in the upstairs bar. But that’s a story for another day.