Recently I found myself struck by a thought as I wandered in amongst the vibrancy and boisterousness of the beloved melting pot of ethnicity and street traders that is Moore Street. In the lead up to this I was pondering a subject far from the reality that surrounded me in the market of Moore St. – English Peerage. The Peerage of England, for the purpose of this article, is something we’d describe as an umbrella term for all of the silly bollock-talk regarding dukes, barons, viscounts and other such made up titles that happen to get bandied about by our nearest neighbours to the east. And the reason as to why I’d been thinking this deeply about such a thing in public was the same reason as always – the pub! 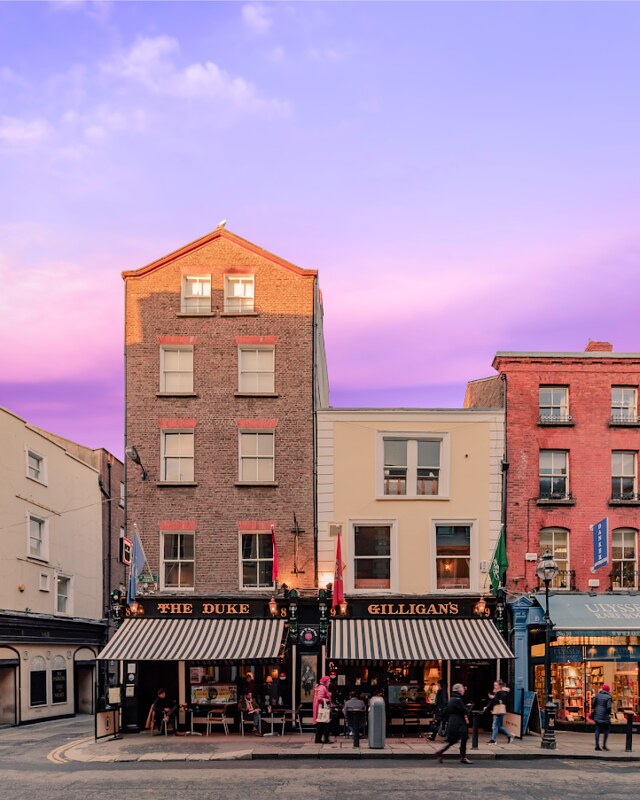 The Duke on Duke Street, it seems was named after some aul codger named Charles FitzRoy who in addition to being the Lord Lieutenant of Ireland was also the Second Duke of Grafton. His father – Henry, First Duke of Grafton was married to a Countess and was also an illegitimate child of King Charles II and Duchess Barbara Villiers.

It was in the middle of trying to make sense of all this guillotine-worthy convoluted nonsense, I found my pattern of thought interrupted by a hardy street trader who was noisily speaking to a friend whom she hadn’t seen in a while. Filling her friend in with all of the latest goss, she spoke seamlessly as she navigated her words through the complicated array of extended family and friends.

“Well, ye know Patrick, from Domnick Street dont’che? Ah, ye do – Wacker they use’ ta call ‘im, he looked after the boxing up in Sherrifer. Well, he’s only after going and getting some youngone from Cabra up the pole. And ye won’t believe who she’s related to!? Only Biddy Reilly from Mountjoy – you know yer one Biddy – Bridget! Ah, ye do!”

It struck me there and then that these street traders, with their inherent skills for navigating complex family lineages, would be perfect candidates for teaching people all about that English peerage craic. So let’s just remember that if all these greedy developers do manage to knock Moore Street and make them redundant. They’ll have a job over in Windsor, no bother to them.

So anyway, The Duke. It seems if you stand on Grafton Street blindfolded and throw a coin over your shoulder that you’ll likely hit a pub with ties to numerable writers of International regard. I’m even beginning to feel like I’m repeating myself in some of these write-ups going on about various pubs’ ties to writers, but The Duke is yet another public house which lays claim to having sheltered the likes of George Bernard Shaw, James Joyce, Brendan Behan, Patrick Kavanagh, Flann O Brien and is another renowned Dublin Literary Pub. So renowned in fact that it is the starting point for the Dublin Literary Pub Crawl. Which we really must get around to doing one day!

The interior is cosy, and remarkably so given the expanse of the pub. Wooden floors and carpet make up the flooring. Traditional seating abounds and there are even open fires! The lighting tends to be spot on and the colours are gentle too – all in all, it’s a boozer that ticks all the right boxes for us, aesthetically speaking.

The pint tends to be decent, nothing to be dreamt about but nothing to inspire any nightmares either. Alike most neighbouring watering holes, you’ll want a Duke’s wage to be drinking comfortably in here. We last paid €5.40 for a jar which is just too much if you ask me.

But price concerns aside, you can’t mistake the importance of a boozer like this which has stood since 1822 and houses an interior mostly unchanged since the 1890s. How lucky we are to live in a city containing such historical premises while having none of the nonsense for which they’re named after.