Recently we were pinting of a weekend in Stoneybatter and took in Hanlon’s (amongst others). We arrived mid-afternoon, still a touch tender from the previous night’s shenanigans.

We settled in the bar which ticked all the proverbial aesthetic boxes – it being sectioned by dark woodwork which contrasted well with a lighter mosaic tiling underfoot. Panoramic windows left older patron’s eyes unstrained in the reading of their papers as they propped up against a bar which runs along the space in harmony with the shape of building. Sitting at this bar one could gaze in appreciation of an antique register behind it; whilst another could look beyond it and muse over a clay head that was either a toddler’s art homework or a medical study of the woes of elephantiasis. 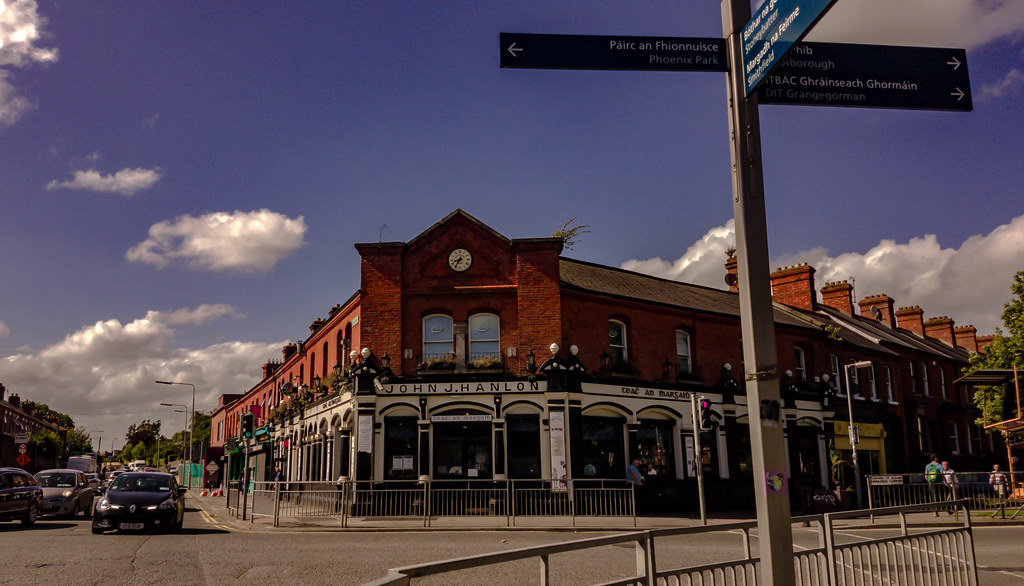 The pint was grand; drinkable and well under a fiver. We ordered a cordial at no charge too which deserves an honourable mention. The locals were of good character, I’d a bit of an earwig on a few lads debating over what year Dublin Bus introduced power steering and it was like listening to some sort of unearthed Sean O Casey text.

About halfway through our jars, an elder local who happened to be garbed entirely in golfing gear arrived and duly ordered a pint. Having settled beside us we noticed that he was scoping us out a bit. Upon a lull in our chat he sensed his opening and interjected by thrusting a finger toward one our pints and merrily asked “What’s that..?” A bit taken aback one of us responded “That’s a lovely big pint is what that is”. Unsatisfied with our answer he replied asking “Dyis wanna know what that is?” “G’wan” we answered. He paused before finally answering “That’s a cappuccino!” he proudly exclaimed. “A cappuccino, that what that is” he suffixed in the midst of our bemused laughter.

He went on to regale us with tales of his golfing career to date all while ignoring the seven or so questions we asked about how his game had went that day. As we polished the dregs of our jars and made for the exit the encounter was made all the more strange as our golfing buddy requested one of the lads to sit on his lap. He politely declined.