Though there’s no smoky haze or abundance of black faces, and still without the bourbon stink or distant cricket hiss you can still close your eyes and immerse into the hollering and the bawling of man and instrument. And in the rhythm of that juke joint rattle you can cast the Liffey as your Mississippi, and Martin Dunleavy as Blind Willie McTell and just, nearly, almost reach a state of transcendence. 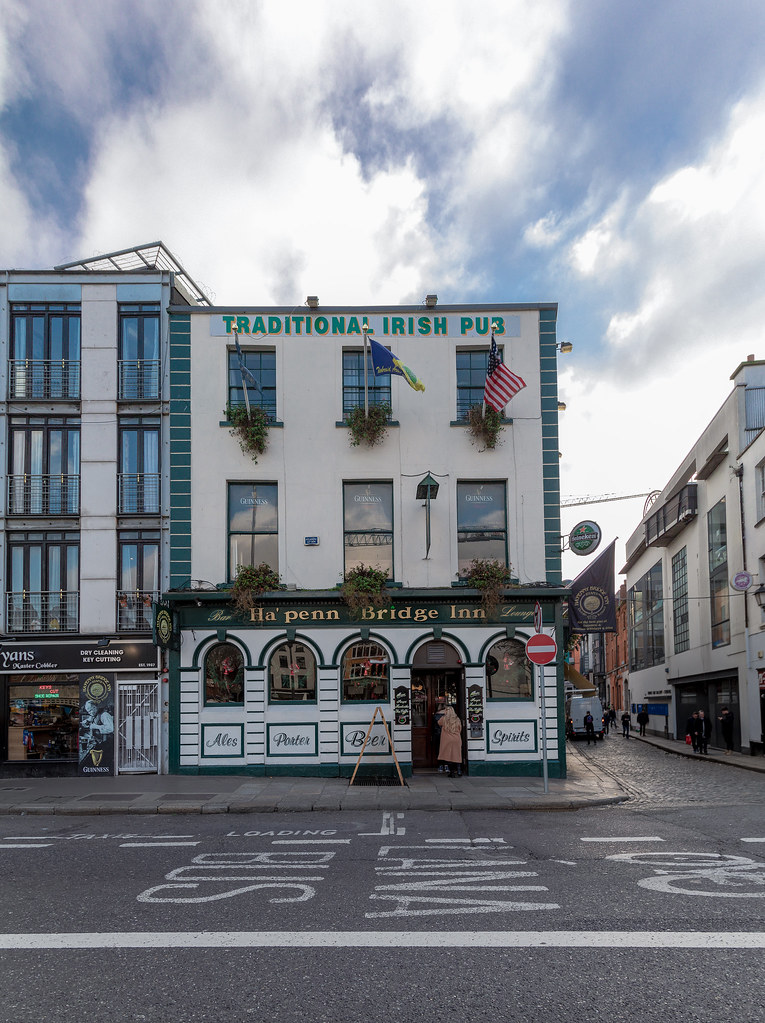 But then it all shatters with a sharp tug on your coatsleeve and the piercing screech from the reddened face barking violently and abrupt toward you… ‘DRINK! DRINK!’ he screams it into my baffled face as I struggle to muster a response. “DRINK!” he screams louder again. And just as I begin to utter a response, he clarifies the matter – ‘Buy a drink! This music isn’t free”. He’s a manager… or the owner. I’ve been in the pub for no more than 40 seconds.

You could say that my first adult experience of the Ha’Penny Bridge Inn was a bit unusual, well that was what I had assumed until I’d come to realise that finding yourself at the receiving end of the ire of this particular barman was not an unusual occurrence. Dozens of people have too relayed to me, their stories of being howled at in this particular pub. I even seem to remember hearing Lankum recounting a similar tale onstage to a sell-out audience in Vicar St one night, and again in an interview.

I’m not for one moment going to suggest that it’s okay for a grown man to shout at people like this, but you might forgive me on this occasion for endorsing this man’s penchant toward tirade. Allow me to frame it in terms of Bang-Bang. Bang- Bang, Thomas Dudley to his mother, was a Dublin character of old and is rightly revered for the break from mundanity he provided to ordinary Dubliners of his era. But, an inescapable fact of the matter is that there were almost certainly persons who departed from an encounter with him in a less than a positive mood solely for the reason that he didn’t conform to the status quo. For better or for worse, this shouty barman is a character, and you’ll certainly leave the pub with a good story if you happen to trigger his vocal cords, which is eternally better than leaving with no story at all.

So, a month or two back Pintman №3 and I, in the absence of any nearby uncharted pubs, decided to seek out this pugnacious publican and get to grips with a pub we haven’t paid much prior service to in the past.

Arriving in of a weekend evening we found the place as busy as expected – I set about grabbing the last remaining seat while Pintman №3 headed to the bar. Returning pintless shortly thereafter, Pintman №3 tossed a wrapped knife and fork onto the table leaving me to wonder aloud as to whether he’d ordered food. No, no he responded, throw them into me bag there will ye? Obliging him, I held off on a follow-up question when he immediately explained his rationale around the act – it’s €5.90 a pint, have to make that up somehow.

One of the more authentically traditional boozers of the Temple Bar district, the Ha’penny Bridge Inn is standard enough in its appearance, an L shaped sort of room with the bar on the larger side of the L, we’d categorize it as a small to medium pub. There’s no messing about with seating which is upholstered in a red pattern and comes just as good and cosy as it would in any standard suburban local. A mesh of tile and wood makes up the flooring and the most notable feature of the pub is probably the collection of fabric badges and crests which are affixed to the ceiling above the bar. We agreed that it had the makings of a good cosy shop but lost out on being classified as such due to the front doors to the street being permanently open. Oh, and that €5.90 pint was far more acceptable to all relevant sensory considerations than it was to those of a budgetary nature.

In the end, having discovered that our cacophonous friend wasn’t about, we headed on for somewhere a bit more familiar on this night. I hope he’s still putting in the odd shift now and again. The Ha’penny is certainly by no means a bad pub and is most definitely the pick of the bunch when you lump in its nearest neighbours. So, if you think €5.90, or 1,180 ha’pennies, is a fair price for a pint, by all means – have at it. Just leave the cutlery alone!