It’s gas the things you pick up when you’re trying to add some substance to these DBP posts. I say this having spent the previous twenty minutes googling what the correct architectural term for that cone-shaped window-box type structure on the corner of the pub in the picture is – all in the hope that I could start this post some sort of semi-intelligent sounding blurb. Anyhow the structure is called a turret and suffice it to say that we haven’t encountered too many of them on our travels before. As we approached Kavanagh’s we wondered whether the interior of the pub would live up to the expectation set by the striking exterior and in the author’s opinion, it most certainly did. 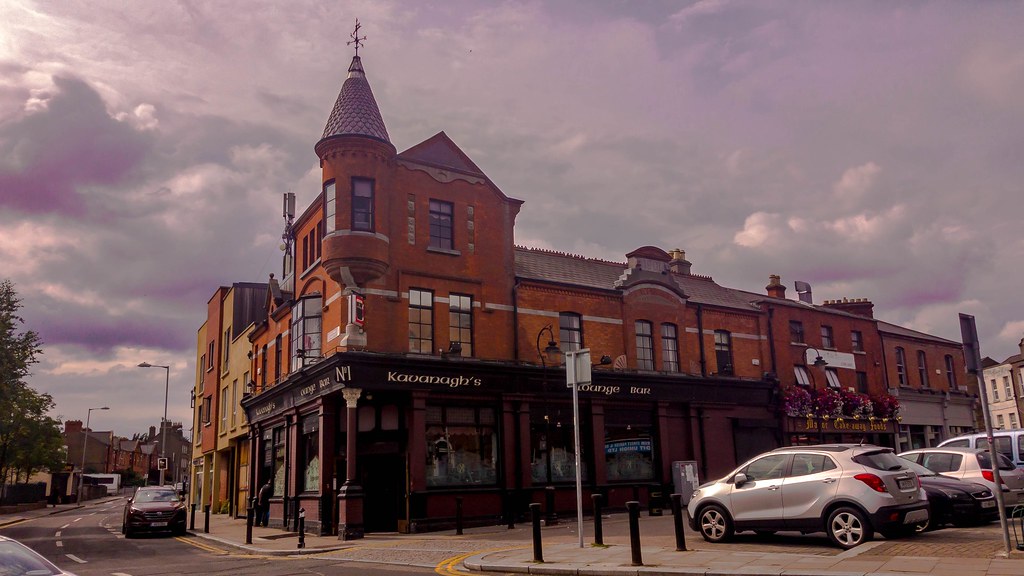 Alike many of the pubs we’ve been posting about lately –Kavanagh’s boasts bespoke wooden panelling. This partitions the bar into two main sections: a smaller snug area beyond the threshold and the larger bar en masse. The generous allocation of window space coupled with the large light speckled tiles (which some of the lads weren’t too fond of due to their resemblance to those in their secondary school) make the bar a far brighter space than the lounge.

The main talking point of the interior of the pub however was something which was as unique to the Dublin pub experience as the turret on the outside is. A colourful panoramic mural depicting a Spanish themed matador scene spans the considerably long wall space atop the bar. When enquiring about it we were reliably informed by the barwoman that it (painted by local art students years ago) is thought to depict the tale of an affair if read in one way but can be interpreted in different ways depending on how it’s read. She then went on to tell us how the aforementioned controversial floor tiles matched those in the local church too.

We propped up against the bar in the larger section of the room and found ourselves on the receiving end of three creamy pints. The bar was empty enough but we enjoyed a bit of neighbourly rivalry between a few of the locals one being an Englishman who was taking a bit of a slagging upon a Scottish equalizer in the ongoing world cup qualifier. Top pub, we’d return in an instant.