Jaysus lads, let me tell you now that Dublin By Pub isn’t always an easy affair. It’s a Wednesday afternoon and I’m back in work after the weekend. The voice isn’t back yet, the head is still twingeing and I’m still having flashbacks of all the Buckfast sodden debauchery we’ve been up to at the weekend while we were out of the capital for a bit. I don’t even, in the slightest, want to be thinking about alcohol, nevermind writing about it. But duty calls and here we are. So you might forgive any decline in quality for this time around. Cheers. 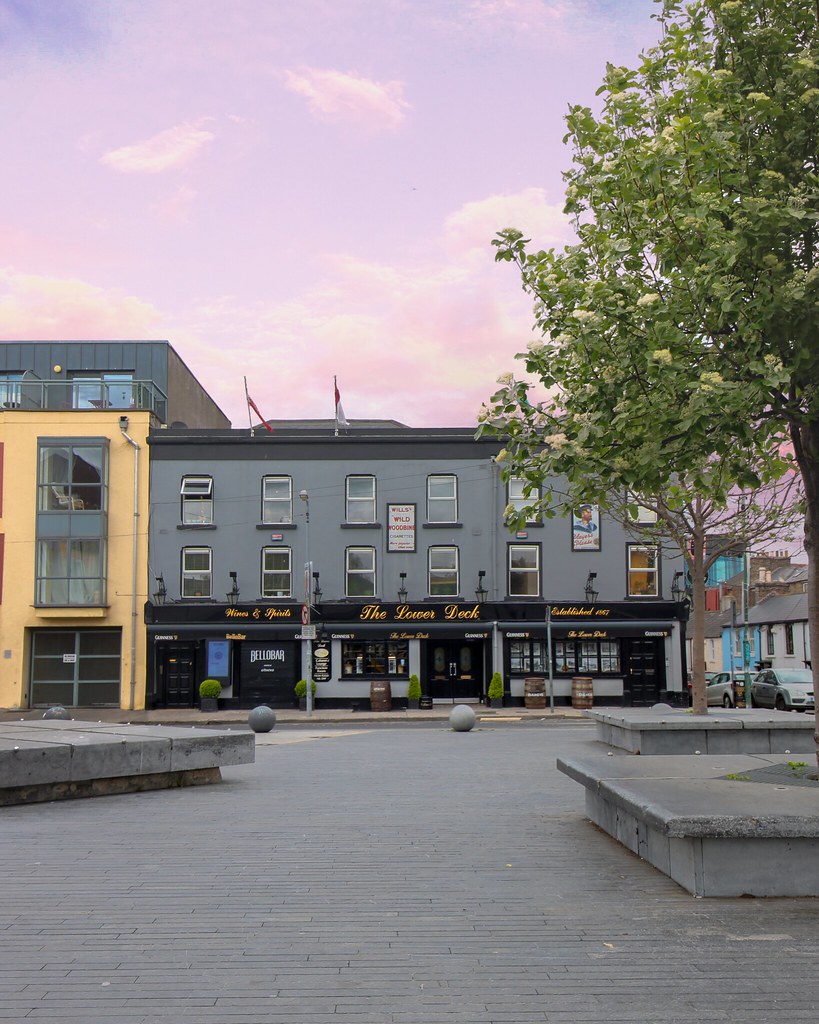 The Lower Deck is a pub that’s evaded me for years and years. Sneakily hidden around the corner from The La Touché Bridge which facilitates those wishing to traverse the canal from Portobello to Rathmines (or vice versa), it’s a pub which it turns out I’ve had plenty of time to find. The online authority on Dublin history – comeheretome, reckon a pub is on the site since the 1830s. A good snoop around online has brought up a couple of images of the pub where it has been named both McDermott’s Harbour Bar and Michael Ryan’s. Interestingly enough, the concrete space out the front of the pub, often frequented by skateboarders nowadays, isn’t there in the picture of the pub as Michael Ryan’s – instead it’s filled with water seemingly having been a part of the canal itself at one stage. And by the time that the pub is named McDermott’s it’s after been filled in and used as a carpark.

Edit: The body of water was known as The Portobello Basin or The Richmond Basin. Another view here and here

So in its current guise, the pub is known as The Lower Deck which does fit in with the pub’s proximity to the canal but is also a good euphemism for the part of the body where all the action happens. It’s a reasonable-sized boozer and houses a music venue in its basement called The Bello Bar. We arrive of a recent Saturday afternoon when there was a touch of summer in the air and made straight to the bar.

The pub is a decked out (yes, decked) in a traditional enough style with upholstered couches, high and low stools around the place. The bar sits as a rectangle in the centre of the room with the space around it divided up. Raised sections sit upon the left as you walk in and as you make your way to the further side of the bar there’s plenty of low seating on offer too. It’s a pub you could get cosy in easily enough – and one with an immaculate jaxx by the standard we’re used to.

The pint was a good one too, no complaints were heard around the table and not even on the price which fell below the fiver mark. Nothing short of a miracle around this particular part of town.

My favourite part of our visit to the pub though was to take in this aul lad who was perched with a pint and a tablet (the electronic kind, nothing small and blue to see here) on a table upon the periphery of one of the raised sections toward the back of the pub. He was the sort of man that reminded me of my own father insofar that he had the look of one of those aul fellas that treated advances in personal computing with nothing but persistent reluctance. That is until one day they were made aware of the advantages these technological feats had bestowed upon the experience of the watching of and gambling on horse racing. This man, however, seemed to have taken things a step further than my own da and had set up in the pub using his silver surfing credentials to dispense all necessary information lacking from an immediate proximate bookmaker. I think he was even taking bets. Fair play to him.