Of all the questions that people level at us here in DublinByPub, the one that we seem to find ourselves on the end of the most is that which seeks to identify what our favourite thing about the Pubs of Dublin is. Now if we’re entirely honest with ourselves here, I think we’d have to admit that the only consistent thing about the answers we’ve given to this particular query over the years would be the level of inconsistency that could be attributed to them. For, you see, there are a great multitude of things that we hold dear when it comes to the watering holes of this city – and if you are to query us on such a broad topic we will take full liberty to fly off on any given tangent influenced solely by what happens to come to mind at that particular moment. 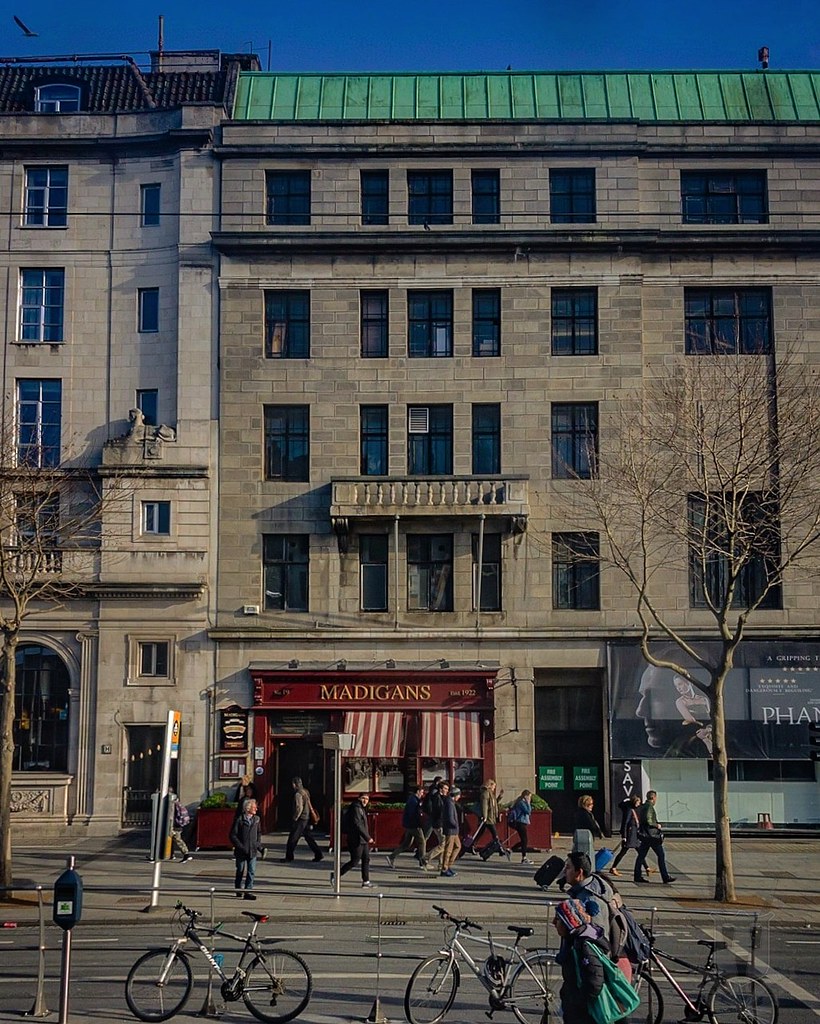 Today, for example, our feature of choice would be history – we’ve said in the past that an interesting history is a marked advantage (yet not a pre-requisite) when determining what makes a good pub – this is definitely a statement which we would still stand over. One of the handier things, though, about a pub with a rich history (from the perspective of someone who happens to be in the business of writing about pubs) is that they offer a good hook from which a piece of writing could flow from – this was certainly something I had hoped would apply to Madigan’s of O’Connell St when I sat down to try and write this piece, all of about two hours ago.

You’d think that a boozer sitting squarely upon the country’s most historically significant thoroughfare would be one that would be steeped in all sorts of ancient wonder, wouldn’t you? But a good hour or so of uninspired googling would suggest that there’s not too much to tell here. My poorly effected research would propose to me that the pub is housed in what was previously part of Savoy Cinema (I’ll have to drop into me Grandfather and confirm that) and was established in 1984. Personally, I was hoping that I’d find that the building was established in 1790 – not because of any reasons pertaining to history, but just because it would have lead nicely into my next paragraph.

€17.90 is the unfortunate sum that yours truly paid for the only round that three of us had in Madigan’s of O’Connell St. Guinness came in at an eye-watering €5.70; a drinkable pint, albeit with a bit too big of a head on top – we wondered if this was an intentional measure taken to safeguard customers against choking when they glanced back down at their receipts. Needless to say, there are far superior pours at infinitely more agreeable prices throughout the city.

Unlike the price of the drink, the appearance of this pub isn’t something that we could fault too much. Ubiquitous and pristinely up-kept mahogany characterises the overall look of the pub – dividers and hatches aplenty offered momentary distraction from the pain emanating from the pocket wherein my wallet was kept. Pintman Nº2, while agreeable to my positive assessment of the interior, was quick to knock off a few more points by wondering why a pub charging five seventy for a jar is still showing World Cup matches on a fuzzy, mid-2000s era, CRT style TV. “Surely they can afford a flat screen by now”, he protests.

The customer base is unsurprisingly mostly made up of tourists, the staff are warm and friendly in their service. The bouncer was prone to nipping in and out to keep track of the score of the ongoing match during our stay – a humourous sort of man, he interacted well with the customers inside. He even suggested a few boozers to us upon overhearing our arguing over where to go next – advice we opted to take in lieu of another round.

This was the last of the many Madigan’s that we had yet to set foot in, ultimately it disappointed. Undoubtedly it’s a well-placed and good looking boozer, but the price of the pint was one that was just too exorbitant for us to justify returning. This now means that Madigan’s of O’Connell St is officially deemed to be DublinByPub’s least favourite of all the Madigan’s. And we include Killbarrack Shopping Centre in that!