Sometimes when a bit of research is warranted for pubs that we post we can end up finding ourselves in some strange corners of the internet, take this moment as an example – I’m currently perusing The Intoxicating Liquor act of 1927 in order to identify the section of the act relating to The Holy Hour. All so I can corroborate a Brendan Behan quote in which he states that the politician who introduced The Holy Hour to the Dáil was shot dead an hour afterward. As I type now I’ve already realised that the link I was trying to establish between McGrattans’ proximity to the Dáil and a quote from a renowned drinker about politicians isn’t really there, or extremely tenuous at best. 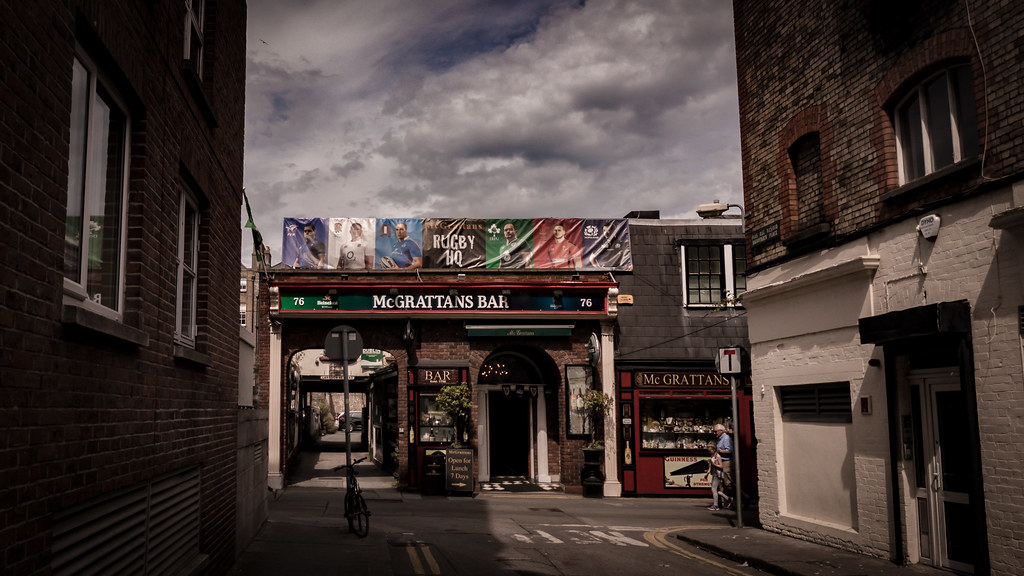 Anyways, for those wondering, Kevin O Higgins – the politician responsible for the since repealed weekly mid-day ban on the sale of alcohol was indeed shot dead – but the timing and motives suggested by Behan’s quote remain unproven.

McGrattan’s is one of those boozers that you just can’t fault the placement of – tucked away and almost remote feeling, it lies down a laneway that’s a mere hop, skip and a jump from the various houses of government located upon Merrion St. Upper. The façade of the pub purports it to have been established in 1798, a claim that is reasonably denied in an article by the fantastic blog: Come Here To Me, which describes the premises as having been converted from a sheet metal workshop to a graduate club for the National University of Ireland in 1964 whereafter it traded as some form of bar up until it’s incarnation as McGrattan’s in 1989.

The interior of the pub is unusual enough – two dissimilar atria are connected by a corridor furnished with pool tables which acts as a buffer between the two. The front atrium is more bar than lounge and would be of the usual appearance seen around the city if not for its wallpaper – patterned stuff reminiscent of that seen in a dodgy strip club you might get bundled into on a budget stag party you might have attended. The seating in the front is entirely comprised of high stools and there’s an open fire too. The back bar, on the other hand, is a more casual affair. Dimly lit, it affords a cosier experience to its occupants with its lower seating and stained glass windows.

Over the years the better nights we’ve had here were after a decent rake of pints, Pintman №4 and I in our younger and more naïve years were both caught short one night when the women we were trying to covertly discuss under the cover of our poorly constructed utterances in Irish turned out to be Irish teachers themselves. Strangely the bad experiences we’ve had were while relatively sober – late last year we happened to incur the wrath of a barman whose desire for us to not drink in the same vicinity as a retired RTE newsreader manifested itself in insults and a noisy accusation of non-payment of a bill that was long settled.

We should close out this post by reminding you, that our idea here is not necessarily to review pubs but to provide a snapshot of them from our perspective, and our perspective here is that we’re probably going to give McGrattan’s a miss for a while after a not-so-nice encounter with a bollocks of a barman. Maybe we should have looked at precedence and kept up our policy of only visiting after a minimum of seven pints, and maybe someday we’ll return, perhaps for the big 250th bash in 2048.