You might note, as you take your travels around this city and find yourself, over a pint, sneaking a listen to a group with a good variance of age, that there may occur a moment where two people at opposing ends of the chronological spectrum will be speaking about what they both believe to be the same Dublin pub. And you might notice that when one of the two makes a description of the pub, that it doesn’t exactly conform to the description made by the other. And if you’re just that inquisitive, you might think to yourself that these two people are speaking about two entirely different places. And you’d probably be right. 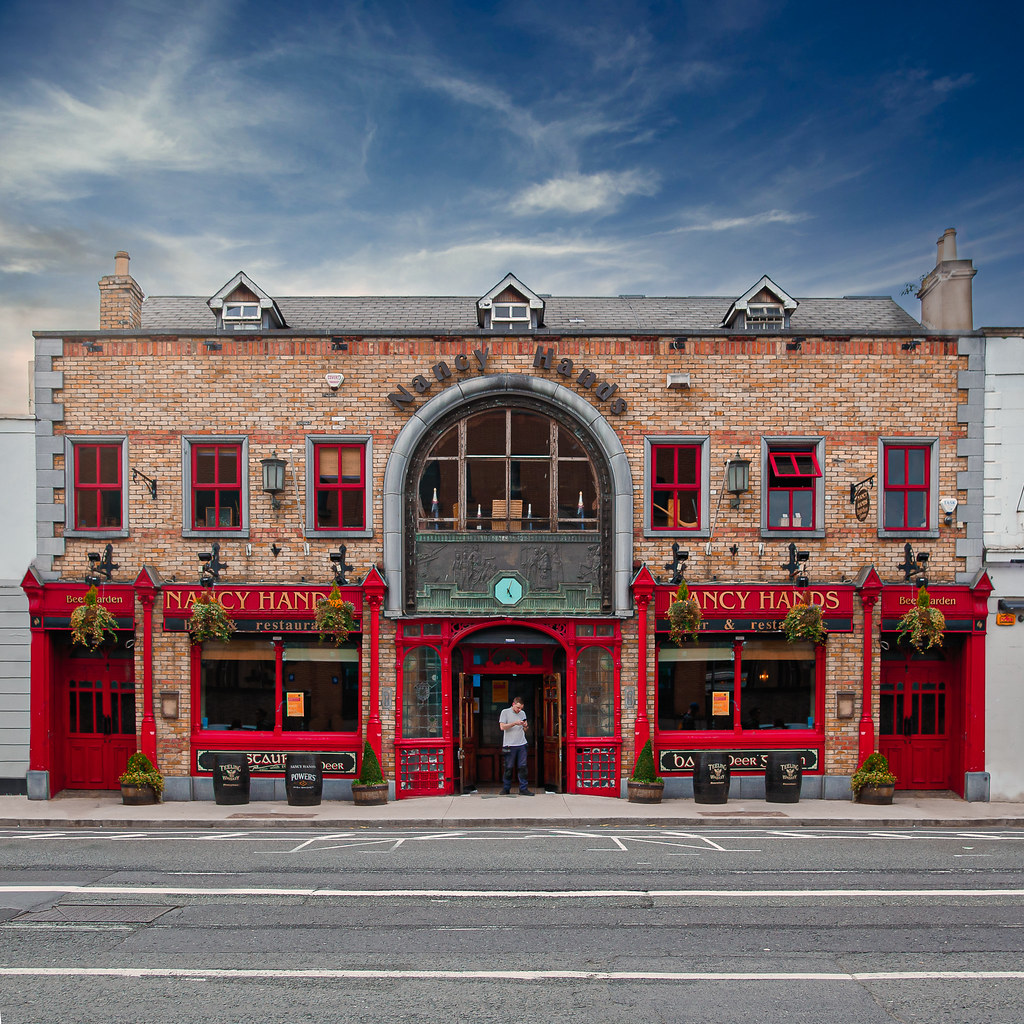 Where the pubs of Dublin are concerned, convolution is often the order of the day. There are dozens of cases of pubs in Dublin bearing a name which once adorned entirely different premises. And as you might have imagined, Nancy Hands falls under that remit too. Having been previously named as The Deer Park, the pub takes its current name from a pub in the Phoenix Park, The Hole in The Wall, which used to be called – you guessed it: Nancy Hands.

The name Nancy Hand’s, as it turns out, is no stranger to convolution when you consider that its biggest claim, arguably, is the references made to it in Joyce’s ‘Finnegan’s Wake’, what this author believes to be the most convoluted piece of writing ever produced.

The pub is traditional in its appearance, red brick and wood abound to create a beautiful interior. The most famous feature of the pub is perhaps one of its staircases, which was taken from Trinity College, where it featured in the film ‘Educating Rita’. But this certainly isn’t the only talking point of the pub which is awash with curios and bric-a-brac. We’ve read that some of the seating comes from a church in Yorkshire and that the decorative copper frontage was salvaged from a butcher in Wales.

We’ve visited a few times down through the last couple of years but a more memorable visit was on a solo run I made into the pub having found myself in the need of shelter from the cold, one early Sunday afternoon of a February. Having plonked myself at the bar and ordered a pint I began to take notice of a couple of aul lads at the end of the bar. I was witness to what was a fairly ordinary scene – four or five men gathered neatly at the end of a bar, attentive to a horse racing meeting which was been broadcast on a small TV. There was only one minor detail in this whole scenario that differentiated it from an entirely unremarkable one and that was that the fact that the horses on the television were not racing on turf or sand, but on a blanket of snow.

As you can imagine, this was high on the agenda for topics of conversation being considered by the locals. First there was a general round-table discussion on where everyone thought it might be. The Nordics took an immediate lead just after one of the men was ridiculed for suggesting that the meeting might be in France. And just as ‘up around Scandinavia and tha’ was about to surmount an impassible lead, the loudest of the group made an impassioned recital on why he believed that the racing had to be coming from North America and empty vessel or not, this lad was not without his backers. With that a consensus had been formed and most had agreed that these were north American horses that were being televised to this comfy corner of Dublin.

With this agreed, the troupe then began in their attempt to establish whether the pattern followed by American racehorses was the same as that in this part of the world. Horses race clockwise here, there was no disagreement there – but as far as making any semblance of a call on the direction followed by the gee-gees, stateside, was concerned, not one of the men dared put there neck on the chopping block for that one.

A relatively protracted period of silence followed only to be broken by the smallest of the men who then chirpily enquired as to whether “it’d be anything like the jaxxes over der?”. His perplexed audience reacted as such, affording him the opportunity to elaborate: “ye-no, de direction of the water, like. It goes the opposite way over there doesn’t it?”

There followed a short lesson on the hemispheres of the world as I bit my tongue and refrained from interjecting with a Simpsons reference. The next race started, and it was determined that these horses were in fact racing anti-clockwise and all were then in agreement that this had to be an American race meet that we were watching. “So, would them horses be right-hand drive, then?” enquired another of the lads to the gaiety of the others.

As if all this wasn’t entertainment enough, it was the last race which abides in memory the most. Not content enough with the distinctiveness of being an anti-clockwise, snow covered track; this meet had one last trick up it’s sleeve. As the camera began to concentrate on the jockeys readying themselves, the bar began falling into silence. The reason for this was almost certainly the fact that none of the jockeys had mounted their horses and were all busy attaching skis to their feet.

With that, they were all assembled at the starting line – each with a hold of a pair straps apiece, trailing from their respective horses . And before we could even gather our thoughts, they were under starters orders and were off – each being dragged, on skis, by a horse. Laughter erupted and it erupted in the truest sense of the word – violent, gregarious, unfiltered belly laughter filled the bar. Staff came bounding in from the lounge to find out what the noise was. Every person in the bar was laughing! Two tourists entered, went noticed by all of the laughing staff and left again.

The race ended. And wiping the tears of laughter from my cheeks I think I’d subconsciously become aware that the craic could never top that which had just happened. So i killed what was left of my pint and hit the road.