Coming toward the latter end of 2021, we’d had it fully planned and spec’ed out for a good while. It had been a slack year for the cause with all concerned in the DublinByPub ranks – assorted big life changes and a worldwide pandemic had given time its relished advantage to get between us. So when the opportunity to get the band back together and collectively hit a few city-centre pubs presented itself to us, we knew we had to make it count. It had to be one of our most wanted. It had to be Noctor’s. 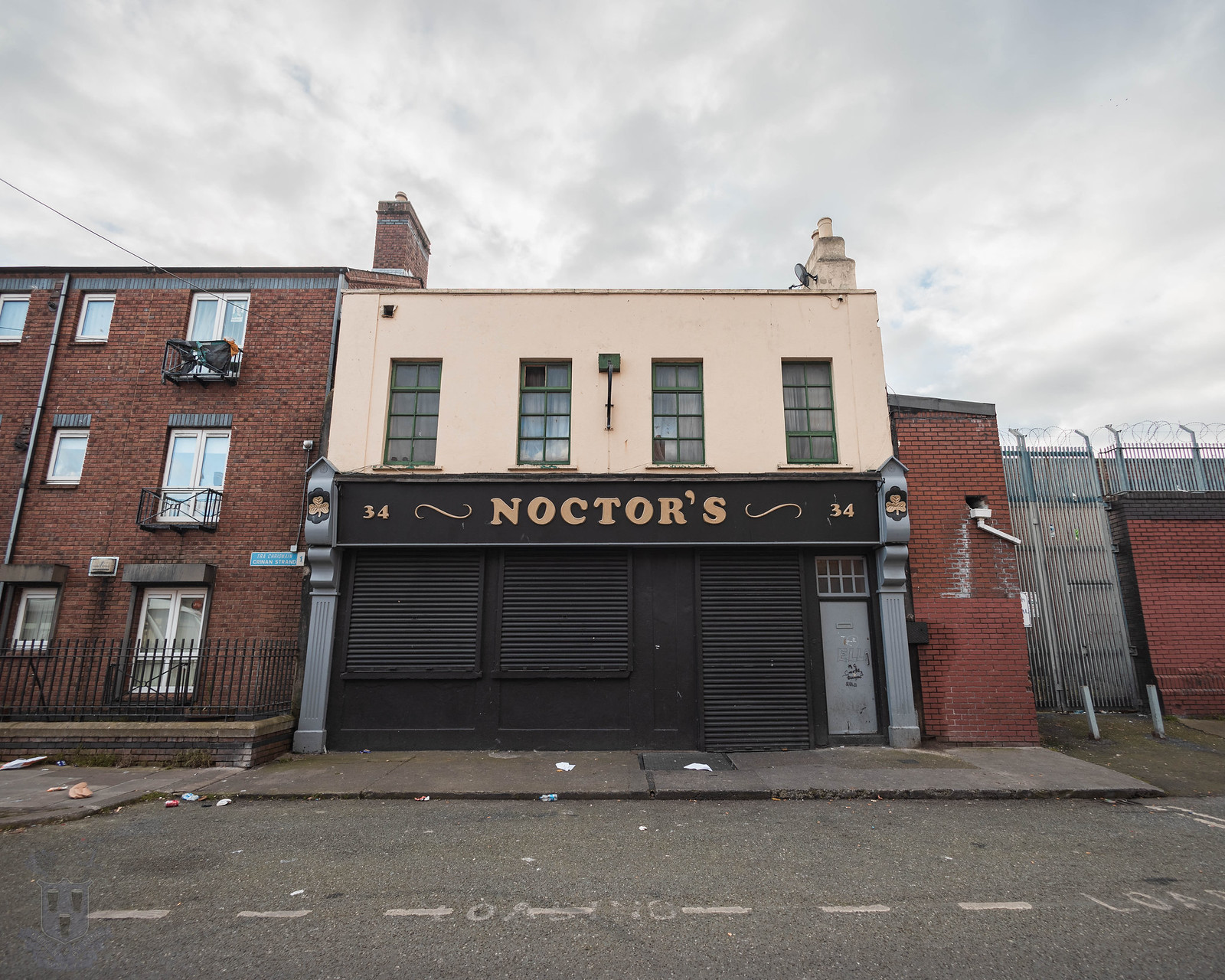 There was to be a half-day, a preferred route, and a plan b, we may have even discussed wardrobe at one stage. But in the end, pints, just like they always do, would make light work of all these well-honed plans, leaving a half-drunk troupe of us bundling up Sheriff Street under the cloak of darkness, a few weeks out from Christmas.

Now let us, at the very outset, state that we have no interest in perpetuating the rough and ready classification that we’ve often heard attributed to Sheriff St. But with that said, we’re not looking to paint this part of Dublin 1 as some sleepy, oak-lined friendly avenue, either. We are but mere impressionable suburbanites. Suburbanites who exist and communicate, more than many, in that pub-talk realm of lore and hyperbole – and it’s in these spheres, exclusively, where we hear mention of, and talk of Noctor’s. And when this particular public house is up for discussion, the sentiment is never positive. It’s always tales and warnings of how “you’d take your life in your hands going up there” and that “you’d do well to keep away from that mad kip”, and so on, and so forth.

So with these warnings and tales of woe, alongside other nuggets like the supposed fact that Jim Sheridan brought rapper, 50 Cent here one time, making our existing curiosity curiouser, it’s not long before we’re stepping through the adjoining financial district and making haste toward Sherriff Street. We may be, outwardly, acting like we’ve not heeded any of those cautions, but a spike of adrenaline, internally, is telling an altogether different tale.

When we shortly find ourselves turned onto the fabled street, the initial reaction is one of disappointment. An absence of a glowing façade, or assortment of smokers, all compounded by a closed set of shutters, leads us to initially believe that the pub is closed and that our journey has been a pointless one. Pintman №2, not being one to waste valuable drinking time, immediately sets course to return the way we came – only to look back and realise, just like in some terrible slasher-flick, that he’s completely alone on the dark street. Heading back towards the pub, he realises, just as we had, that, despite the unopened shutters, the pub is actually open. Immediately, he enters to find us standing at the bar on the receiving end of what can only be described as an interrogation at the hands of the barman and a few of the locals sitting around him. Questioning is carried out in the form of:

Where are yous from?

What are yis doing here?

Who told yous about here?

Insisting that we’re only here for a few pints, as the rest of us mumble incoherently in not-so-stoic agreement, Pintman №3’s retort is met with steely silence before the barman declares, in response, that he hasn’t decided if he’s going to serve us yet. At this point, things go sad-funeral quiet as the staff and the locals continue in their inspection of us. And just as we consider letting go of our last collective nerve and bailing, the bar erupts in laughter.

What do yis want?

Sit down there and I’ll bring them over.

By the time we’re about to sit down, we’ve acquired the attention of a fair few of the locals, most of whom engage us in conversation. Pintman №3, in a manner befitting an affable 1950s Fianna Failer, makes no qualms about joining a sizeable table of habitués and chats away with them about one of the locals playing over the speakers – a Mr Luke Kelly. The rest of us, in turn, find a spot and chat across the divide with a woman who happens to be drinking a can of Tenants – an unusual sight in a Dublin Pub, we agree later.

As promised, pints are dispatched down to us in short enough time and we’re more than impressed with them. We note them as being of an incredibly high standard and the price to have been set at €4.50 a pour (Late 2021). A bargain, we agree, especially in the context of the comparatively inferior pints we had been drinking for 5.70 on Capel Street an hour prior. 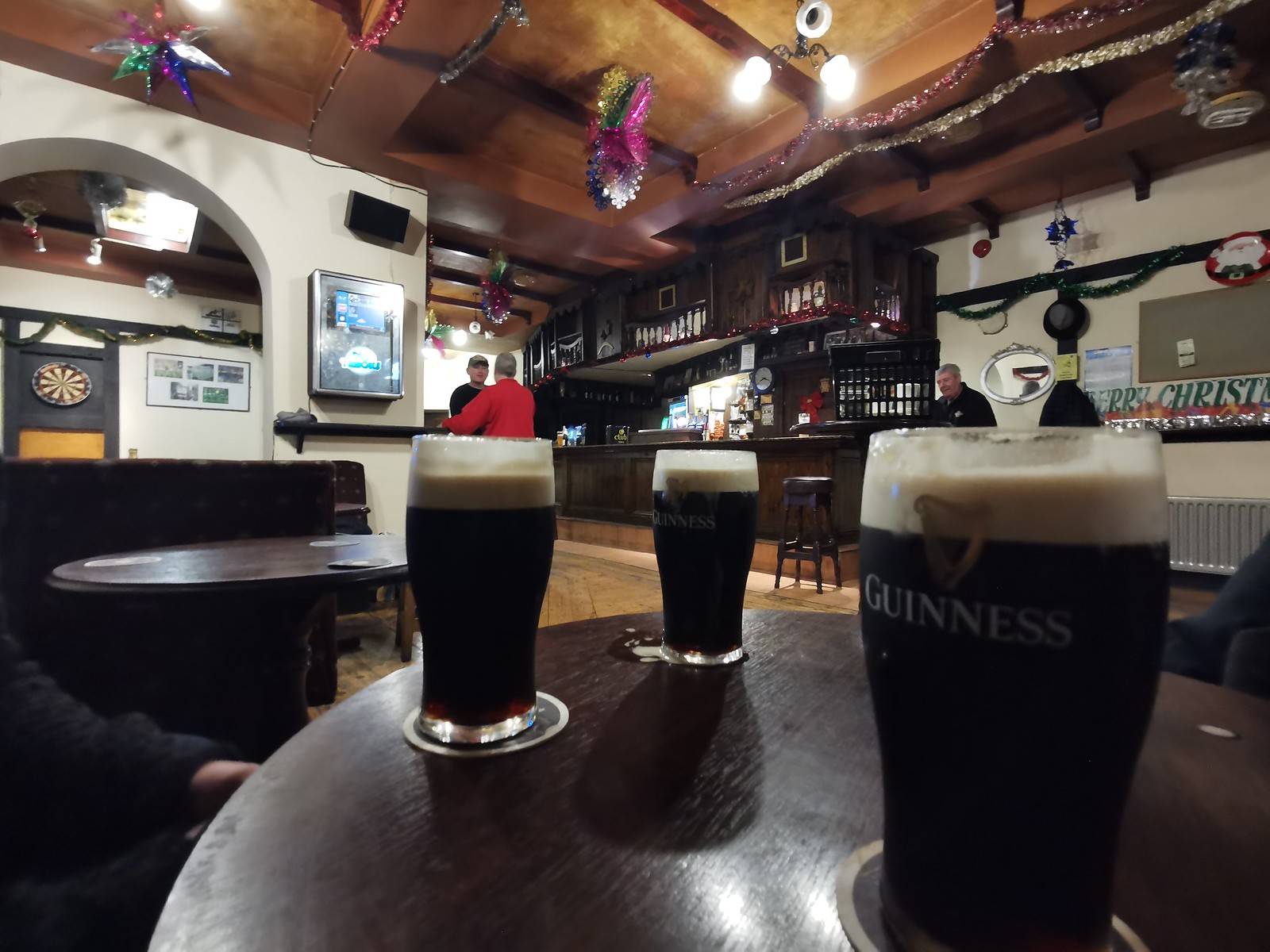 Décor-wise, this is a pub where function certainly trumps form. That’s not to say that we haven’t drank in worse looking pubs (we have) but, suffice it to say that other licensed premises within the city might be more likely to end up in that Dublin 2023 calendar your Ma is going to get you for Christmas. The pub is, however, laid out well for its intended purpose – a dark wood, small to medium size bar stands on your right as you enter the pub. Banks of low seating take up the space on your left. And there’s a sizeable bank of floor space between the two. Curved arches at the far end of the seating space denote the leisure section of the pub wherein stands a pool table and a dartboard. The colour scheme, overall, is bright – walls are painted in a beige/cream sort of tone and the flooring is a varnished, yet somewhat weathered light wood. Some dark wood in the seats and the tables and shelves add a little contrast.

Earlier in this post, we said that we wouldn’t paint Sheriff Street as a sleepy, oak-lined friendly avenue, as if such a thing was what a street should aspire to. But, in all reality, why would anyone want to aspire to such boredom. Not that you need us to tell you this, but Sheriff Street is an infinitely more interesting place than some leafy, embassy-saturated thoroughfare in Ballsbridge. And, let alone the scores of well-known and beloved Irish people in music and the arts of both today and yesterday that have come from here, this is also thanks, in no small part, to somewhere like Noctor’s. Its clientele is friendly like very few other city pubs’ are and it’s yet another pub that has taught us to take little heed of supposed notoriety.

The Last Night in The Flowing Tide