Ever since Molly wheeled her barrow up the road from those pelt-peddling pricks down at the mouth of Grafton Street and plonked herself where it’s supposed that the Vikings once erected the thingmote, their version of Dundrum Shopping Centre, you could argue that the most westward point of Suffolk street has been subject to something of a rejuvenation. 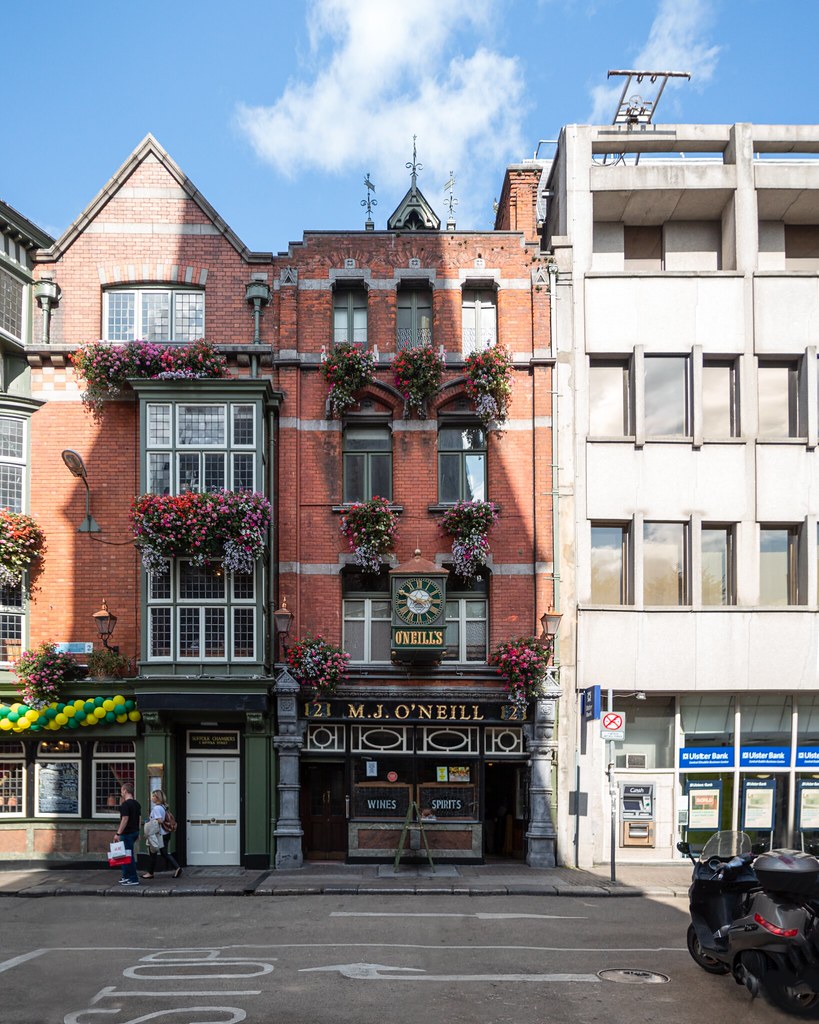 It’s here outside St Andrew’s church that you might listen to the portrayal of fiction as fact when steady throngs of tourists are corralled around the likeness of the city’s most famous mythical brasser only to have her described as if she were as real as Tone or Collins. And as you watch these tourists, one by one, mount Molly’s plinth and degrade the cause of feminism one brush of her brass bust at a time you might think to yourself that it’s not ideal but that it could be worse – it’s only a statue after all and where’s the harm in a few Yanks thinking of her as once actually alive… alive-o. It’s also probably apt enough that O Neill’s is the public house which sits upon this site because it, to me, falls into this same category as the scene aforementioned – it’s not ideal, but it could be worse.

Relative to our, ahem, studies… this bar is quite a notable one insofar that it’s the first where we can conclusively state a connection to James Joyce, a good pub does not make. And yes, this is another pub with strong links to JJ himself, it being featured in Counterparts – one of the short stories contained in Dubliners. In this story we meet Farrington, a legal secretary whose vitriol toward his superiors is severe enough that it manages to manifest itself as a thirst. And such is the insistence of this thirst on the day that Counterparts is set, that Farrington heads off on his afternoon break to quench it:

“He was now safe in the dark snug of O’Neill’s shop, and filling up the little window that looked into the bar with his inflamed face, the colour of dark wine or dark meat, he called out: “Here, Pat, give us a g.p., like a good fellow.” The curate brought him a glass of plain porter.“

Thankfully the standard of the jar seems that it was up to a higher level back at that time for if Jim happened to be writing about my maiden visit to the pub he’d be flinging his lingual prowess at describing how the curate poured my drink into a near empty and used vessel in one single pour and offered to sell it to me at full price. A decade on that still gives me the shivers.

I don’t know whether its just the size of the pub of the proliferation of taps, but the drink in here tends to be an issue more so than it should be. Personally, and anecdotally (off and online) we hear of bad pints galore in here (check out the Guinness we came across on twitter recently in the picture.) and with the price tag of €5.50 a go, the standard should be far higher.

Aesthetically the pub has its ups and its downs. Traditionally decorated, the front bar is resplendent with wood alike all other show piece pubs of the Victorian age around the city. It would be my pick of the many sections on offer especially seen as it’s good and out of sight of the dreaded carvery bar – a feature which Pintman №2, №3 and I have spent plenty of time arguing about. I should also, at this point, mention that the two lads aren’t quite as anti-O Neill’s as myself, their assessment of the place being an adequate one for taking in a match or two. But I think I might have them on the ropes about it these days.

Returning to the point made earlier on, and while not my pick of the bunch, O Neill’s is a pub that isn’t quite as bad as it could be. But with the touristification of Dublin ongoing it’s most certainly following the cash in the wrong direction. And what a shame it is to find that a pub with such fine potential to sit up top with the big leaguers would seem to be having it’s genuine cultural bonafides paddy whacked into a twee tourist only experience. Something which I suppose the quare one outside knows all too well.