As I sit here and try to think of something to write about The Oval on Middle Abbey St. I can’t help but think that writing about this pub is akin to writing about a first love. With that in mind I can only request that you bear with me as I try to avoid the type of over-sentimental tack that adolescent first-love poetry is laden with. Allow me to start by saying that The Oval is one that served as a welcome venue to the young trainee pintman who was inexperienced in the processes that he needed to master in order to become a fully-fledged bar fly unintimidated by any pub he should venture into. 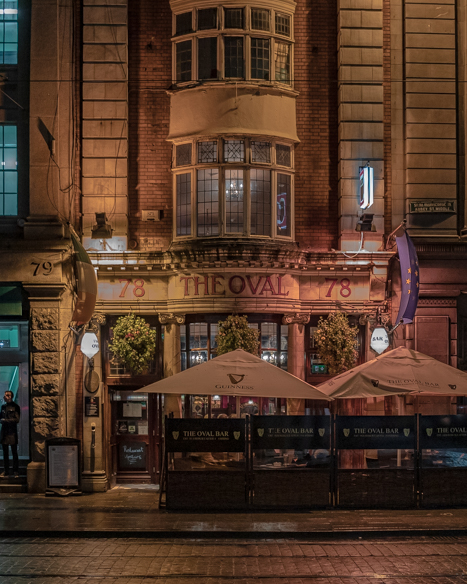 Sitting just off O Connell Street on Middle Abbey Street, The Oval is your classic city centre pub (narrow and opening up to the rear). It’s decorated in comforting hues of burgundy complimented with characterful mahogany. A smiling portrait of Ronnie Drew is hung from the underside of the staircase welcoming all punters in for a few scoops. The fixings and fittings are well polished and thoughtfully installed throughout. All in all it’s a great looking bar.

A building steeped in much history, it has been in use continuously as a pub since 1822, barring a closure for a few unexpected renovations after the 1916 rising. The pub has withstood famine, war and independence, It’s even said that John Lennon and Ringo Starr nipped in for a pint after their famed performance in The Adelphi Cinema across the road.

The Oval’s central location makes it an idyllic meeting point. It’s a perfect precursor to a bigger night out but also a great spot for a session in its own right too. The pint is creamy and nicely priced, the staff are competent and just generally sound out. The pub also offers a food menu if you’re after that sort of thing. They do a cracking hot whiskey with none of the hesitation or indifference other pubs might greet a request for such a drink with. I particularly love to dodge in here and catch the 1 o’clock news over a sneaky pint if circumstances allow.

We were in for a few pints last December and sat at the bar beside two older gents whom we engaged in a bit of chat. After a few pints one of the lads (who was drinking lemonade) divulged to us that his choice of drink was due to the fact that he was a card carrying pioneer and hadn’t touched a drop of the demon drink in forty-something years. Wondering how he got his kicks, we duly enquired- “Dancing” he responded.

I don’t really want to go 40 years without a jar, but I certainly hope I can move like that aulfella when I’m 70. The Oval is a necessary visit for any pub pilgrim and is most definitely in the author’s top five pubs in Dublin City.