Slashing through the darkness in a manner photoluminescent, it sits affixed to cladding, casting all who pass by the pub in its unworldly scarlet hue. Cheekily hinting back to days when ladies of the night pounded this particular beat of Benburb Street, it feels entirely alien and un-Irish – its look, its feel and most of all: its wording. In standard sans-serif, capitalized font it spells the two words out plainly: P-H-A-T J-O-I-N-T. 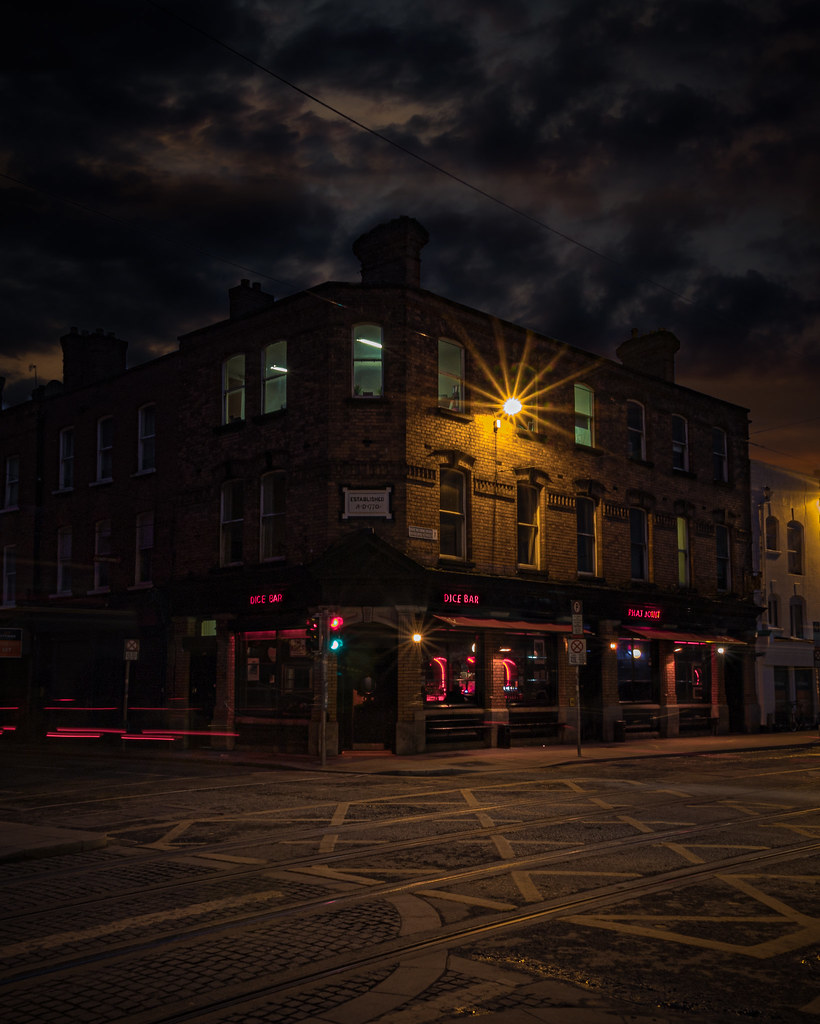 Whether its youngones on the DART calling things that are not lights ‘lit’ or auld lads from Cavan on Facebook calling me a snowflake, there’s always just something about Irish people using Americanisms that just doesn’t hit my ears right. It was this that fed into my preconception – when I’d be passing by that sign. I had managed to conjure up an image of an entrepreneurial Stoneybatter hipster bragging to his pals about how he was going to open, not a deadly pub, but a phat joint. I wasn’t mad about him, to be entirely honest. I’d developed not only a distaste for him, but also for his pub – a pub whose threshold I had never even stepped beyond in my life. This disaste would not abide.

Running longer than it is deep – The Dice Bar, much like its Queen Street neighbour, is a bar whose hipster credentials are more naturally evolved than its contrived counterparts scattered about town. With tones of black, nearly black and red being those most dominant, you’d be forgiven for thinking that this was just another run of the mill traditional Dublin Pub when the lights are off. But visit at night and observe the abundance of neon which provides one of the primary sources of artificial luminance in the room, you’ll find that it’s transformed to one that’s more post underground gig pints than it is aunty Margaret’s 60th.

Offering bar-proximate high stools and combinations of couches and low stools to its habitués, The Dice Bar is one in which you could comfortably spend a few hours drinking in, or go on the batter in, to phrase it with the expression derived from the locale. Options to do so are plentiful, with the bar offering up pints of a house red ale which tends to sell well on the premises. Regarding the Guinness, I’ll have to put my cards on the table here. Neither Pintman №2, №3 or I have been in the pub in a good few years, so we haven’t been able to make a conclusive call.

Normally, the MO here would be to just visit again and rate the pint, but with global pandemics being what they are, we’ve opted to go another route here and contact Pintman №8. A former Smithfield resident and a capable man where pints of stout are concerned, Pintman №8 is a man well able to gauge the quality of a jar. His qualified assessment of Dice Bar Guinness amounted to a belief that the pint was of an acceptable standard albeit that the delivery of same wouldn’t have been up to the standard of other neighbouring shops.

So if ever you do situate yourself in this pub with a decent pint in hand and you still find that you’re embittered at the thought of someone diluting the Hiberno-English lexicon with New Yorkisms, rest assured that your fears are unfounded. It didn’t take me a whole lot of digging to discover that Hughie from the Fun Lovin Criminals once part-owned this pub. And I don’t think it’s too much of a leap of faith to imagine that he, a man well qualified to verbalise utterances such as Phat Joint and other assorted phrases from the USA, may just have been the one behind those red neon words mentioned at the outset of this piece. And when you consider that Hughie and Co. also brought the iconic DiFontaines to our shore, you’ll quickly realise that there’s plenty of room to embrace the Liffey being diluted with just a little bit of the Hudson now and again.

UPDATE: During of May 2020, the proprietor of The Dice Bar took to their Facebook page after apparently suckin’ back on a good feed of grandpa’s ol’ cough medicine. There, they proceeded to make comparisons between the so-called ‘lockdown measures’ imposed by the Irish Government in order to stem the spread of the COVID-19 virus and the transportation of Jewish prisoners to concentration camps at the hands of Nazi Germany. Naturally enough the owner was excoriated by the bemused readers of their statement. They apologized, well sort of… I think. Nonetheless, it would be remiss of us not to mention it. Anyhow, the choice is yours and yours alone when it comes to where you drink, Frank Ryan’s & McGettigan’s across the road are both grand pubs.