Fair play to the gaffer. Most of you probably didn’t know that Dublin By Pub is sponsored by my employers, I mean – how could you, when they don’t even know themselves? But I would like to take this opportunity to thank my superiors for having not copped that I’ve spent the last day and a half conducting frantic research on the topic of the public house in situ at No. 15 Suffolk Street, Dublin from my desk. In work. On company time. Honestly, I’d name them for the bit of advertising here if I didn’t think that it’d get me sacked. 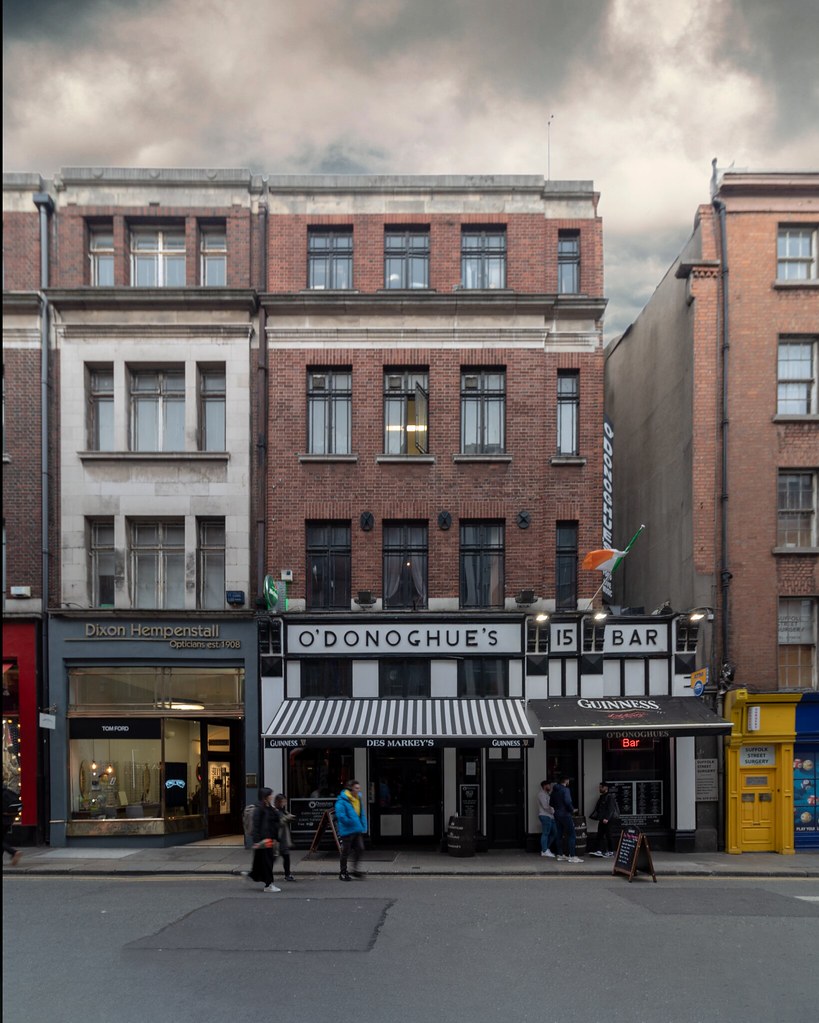 Now I’d love to sit here and tell you that this abovementioned research bore fruit other than my continuing gladness that I decided to make this page an anonymous entity, but unfortunately my limited research has gotten the better of me here – there are just too many loose ends. But on the topic of the history of the pub pictured, I do know the following:

I’ll leave it you yourself to cobble together the history of this boozer, I think in the meantime I need to register with The National Library or put out an appeal for someone to lend me a complete set of Dublin directories for the last hundred or so years. Anyway, on with the pub in its current guise.

A small to medium sized boozer, O’Donoghues is widest at the front with the pub closing in at acute angles toward its rear wall. A raised section is installed at the end of the space and is more often than not used as a stage. Seating is minimal – when unused by performers, the raised section makes use of traditional low tables and stools while the unraised section exclusively contains high seating along the ledges and few high tables.

Now I’ve often decried the layout of this boozer, and Pintman №2 and №3 will argue that I’m just being too picky when I reckon that the Feng Shui of the pub just isn’t right and that the lighting is just a bit too low – and to be fair to them I probably am. The lads reckon that the craic we’ve had in here over the years supersedes any negative impact to be garnered from bad table placement and overused dimmer switches – and they’re probably right there again because we’ve had some serious craic in here.

Our experiences of the pub, having been entirely of the after-dark variety, may be different to others – but to us, this is no pub for a quiet chat. This is our go-to boozer for singing your head off whilst wedged into a crowd of strangers. The crowd is a healthy mix of tourists, dubs and countrymen & women and is usually busy enough. Service is generally well equipped to deal with the crowds and none of us has ever had cause to query or return any pints we’ve had there. Upon our last visit at the end of 2018 we parted with the sum of €5.50 for a pint which is unfortunately in line with the higher prices typical of the locality.

Recently the pub has been in the media over its involvement in litigation regarding financial matters. The content of the article is so full of technical financial shite-talk that a layperson, such as me, couldn’t decipher what in the name of lantern jaysis is going on – but it didn’t sound too good. So, who knows? We could see another name on the front of 15 Suffolk St in the months and years to come. And let’s just pray, that whatever happens, it’s that of a publican.