It’s no surprise that we’re fond of a pint of Guinness here at DublinByPub, the iconic black and white tipple that has been both our ruination and salvation is one we regard with the utmost veneration. Adding further to that sentiment is the internal reaction we encounter when we take a relished wander up Thomas St. in its entirety. It’s in this location that our fondness for a jar of stout becomes most evident to ourselves. Passing the spot where Robert Emmet met his demise on a colonial rope in the name of Irish independence – our sense of historical intrigue shortly finds itself overcome with a sort of Wonka-esque joy as it becomes apparent that to us that we’ve entered that particular area of Dublin that could only be described as The Guinness District. Taking full heed and advantage of these surroundings, there sits a pub which serves as a sort of demarcation point heralding the beginning of this district – and suitably enough this pub trades under the name Arthur’s. 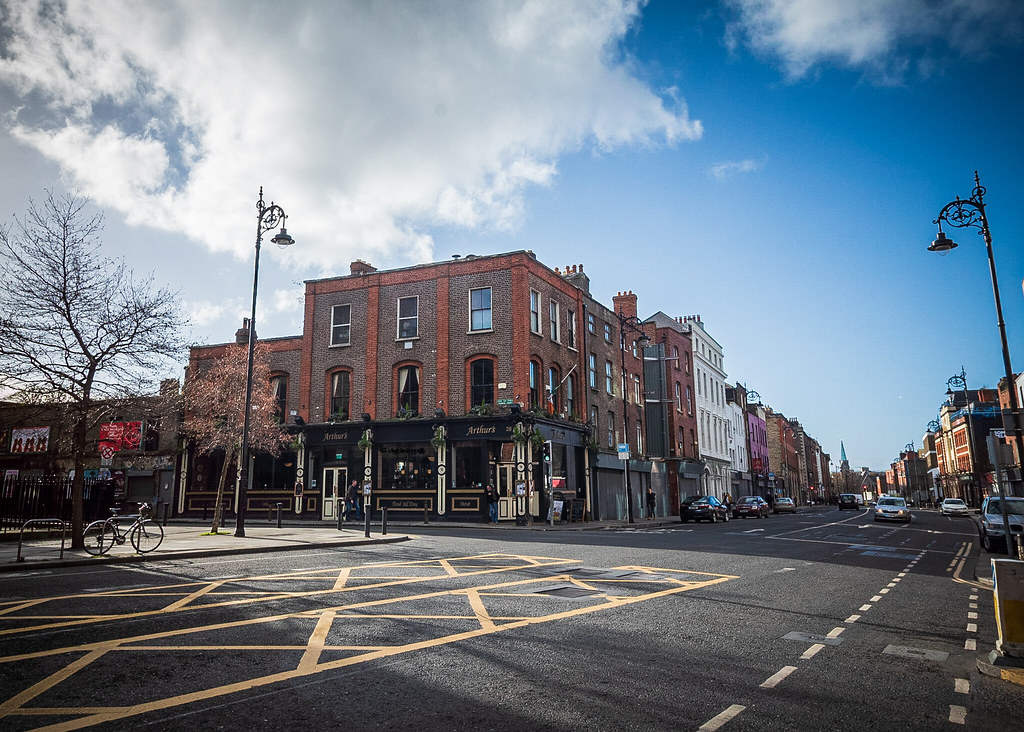 Purporting itself to be the closest pub to the Guinness Storehouse, Arthur’s sits on the corner of Thomas Street and Thomas Court and is indeed a well-placed spectator for thirsty tourists bemusedly wandering up in search of the source. It would be hypocritical of us to describe the fit-out of the pub as anything other than an idyllic interpretation of our preferred design specifications. Wooden flooring and panelling of various tones, mid to dark, define the colour scheme of the bottom half of the space, while the lighter coloured ceiling allows the pub proper use of the ample light provided by its many windows. A massive fireplace sits on the back wall of the pub- the mantle of which holds more candle wax than your local S&M club during a blackout. Upon this same back wall, exposed brick aids the traditional appearance of the boozer and the seating is made up of high stools entirely, with high tables throughout.

This pub is one of the variety whereby the installation of a television was not deemed to be a necessary act – a feature that this author would happily award a further bonus point to that which was automatically credited for the fireplace. Along with all these things pleasing to the eye it is also worth noting that Arthur’s host a decent amount of live music in their upstairs bar too. We’ve been in for a blues night here and there and found the room to be an agreeable location for some music.

But all of the aforementioned is useless if a pub trading under the name Arthur’s in the shadows of The Guinness Storehouse isn’t pouring a pint of porter that’s more than palatable. Thankfully the folks behind the bar on our last visit were more than capable. Having taken our first gulp of the fine specimens presented to us, we were just about to tack on another bonus point until we were handed our change. Realising that we’d just paid five euro and forty cents for one of the shortest travelled pints in the world we immediately rescinded all prior bonus points and made plans to relocate to a cheaper shop. Arthur’s is a bit like that attractive partner you had with the expensive taste. Great to look at, but too pricey to stay with.