Consider, if you will, the following couplet.

“There is a crack in everything

That’s how the light gets in” 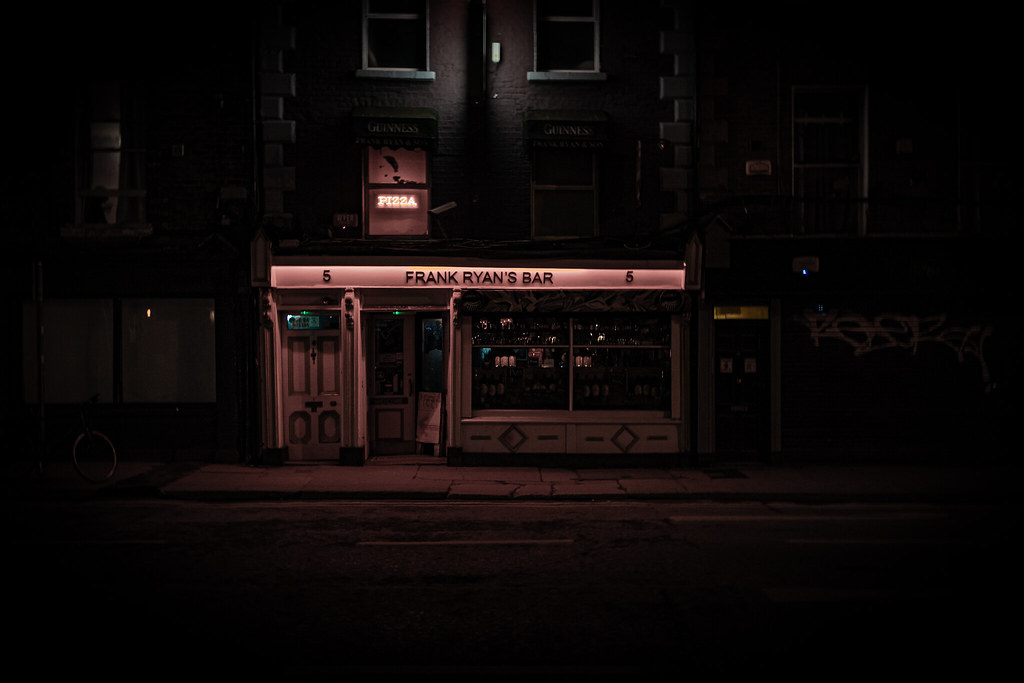 Presumably named after the republican veteran of Irish and Spanish conflicts – we’d be comfortable enough in labelling Frank Ryan’s as the darkest pub in the city of Dublin, perhaps even the entire country. And as you find yourself rubbing ointment into your bloodied shins of a morning after being there, you will surely agree that there’s neither crack nor light to be found in this Smithfield bar. Sorry Len!

A seemingly traditional pub beneath all the darkness, it makes use of wood as its primary material and is relatively narrow upon entrance. Becoming partially divided twice along its length, it eventually steps down a foot or two at the back opening somewhat to reveal a pool table. Feeble light that is afforded to patrons of the pub tends to be by means of tea and fairy light, mostly hued in shades of red. Along the walls and hung from the ceiling, should you manage catch a glimpse, you’ll find any amount of paraphernalia scattered around – the overarching theme of which seems to lean mostly toward music. But, that said, there’s plenty of drink themed bric-a-brac and license plates filling in the gaps between.

I suppose you might call Frank Ryan’s the original hipster pub – it espouses all the principles the newer incarnations are at pains to remind us about. It has the craft beer, it’ll let you bring the madra in, I think it does pizza somewhere out the back too. But because it doesn’t roar this from the rooftop, and probably because the Guinness is pretty decent too, it manages to retain the charm of a proper Dublin boozer.

Whatever about cracks, there are thankfully no shortcomings in the craic in here. Generally, the place keeps a nice relaxed vibe and is the perfect venue for a night of pints and chats. Though, be warned: you’ll want to try somewhere else if you find yourself oscillating at a higher frequency. We decamped into the pub last year, hyper and half-drunk, only to find ourselves subject to the sort of fascism that Frank himself sailed to Spain to fight against. They cut us off! The Bastards!

The morning, nay, afternoon that followed this sorry incident was, as you might imagine, a rough one. Waking to several texts countenancing my proposed cancellation of Frank Ryan’s, the fear set in like a sledgehammer of doom. Such was, and is the abiding memory, of this anxiety that I’ve yet to, ahem, darken the door of the pub since. And to this day the fear that I might have been barred persists. So with that in mind, allow me to finish just as I started, with the wise words of Leonard Cohen. And please, allow me to directly aim them toward the Gatekeepers of the pub which bears the great Frank Ryan’s name:

” If I have been unkind

I hope that you can just let it go by

If I, if I have been untrue

I hope you know it was never to you ”

Covid 19, The Pub-pocalypse and Dublin By Pub in The New York Times
Scroll to top