Don’t you have to wonder about billionaires sometimes? It might just be me, but you have to even slightly agree that there’s something inherently untrustworthy about someone who manages to pass the million mark in their bank account and instead of going full rockstar and pissing a sizeable chunk of it away in a glorious lengthy bender, sits down and plans on how to times it another thousand? Shite craic say we! 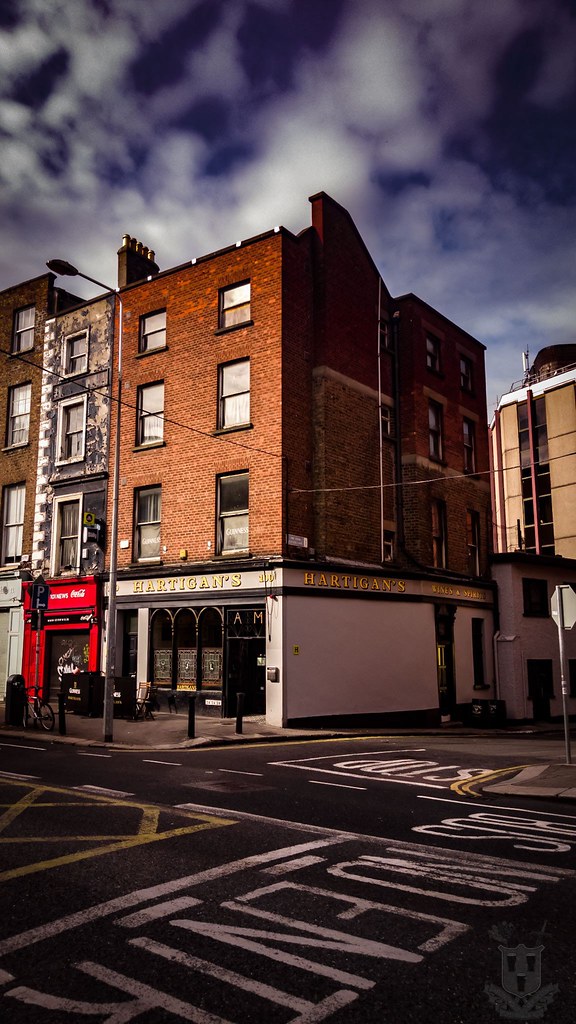 Outwardly, that opening passage will read as if being the start of another ill-advised tangent. I can assure you that this is not the intention. There exists, in my mind at least, good reason to link the aforementioned sentiment to the topic of the pub pictured here, but in order to make this connection, I need to tread a little bit more carefully than I usually would. For this connection hinges heavily upon the mention of a well-known, divisive Irish figure, and this particular person has an infamous proclivity for litigation. Given all this, the person in question will henceforth be referred to as a “well-known Irish billionaire” or WKIB for short.

By now you’ll probably appreciate that there is no setting that I won’t talk about pubs in – so it should come as no surprise that it was over a discussion on Hartigan’s with a colleague in work that I came to learn that WKIB had such a penchant for Hartigan’s that they opted to have a replica of it built in their back garden as part of a landmark birthday celebration. This was an act that in normal circumstances would probably have upped my estimation of WKIB – but this had another dimension. What soured this from being perceived as a mere act of wealthy extravagance was the fact that this pop-up-pub happened to replicate the very boozer in which it is widely reported that WKIB (allegedly) sat down for a crucial meeting with a well-known TD back in the 1990s. It is alleged that the two of them, while there, got up to some shady dealings over some mobile phone licenses and the sort… Allegedly.

A tribunal we ain’t! And given that, we’ll say no more on this alleged meeting, for now, other than to say that it was one that fed into my natural distrust of the billionaire class, and strengthened my nurtured disdain for brown-envelope politicking. But worst of all – this was an anecdote that ultimately led me to approach Hartigan’s with something of a low expectation. An expectation that would ultimately find itself mostly unchallenged.

Boasting the sort of drab appearance that visitors to public hospitals in the 1990s will remember with little fondness, the pub is characterised by a too-bright-for-its-own-good sort of colour scheme complete with a cold hard floor comprising of greyed tiles, with the odd red one thrown in for good measure. Pintman Nº3, having only moments ago, been made aware of the replica commissioned by WKIB re-evaluated, downward, his level of amazement at the feat by remarking that he’d probably be able to throw the same up with a few sheets of ply out his own back garden in half a day “at best”. Rugby and golf paraphernalia was the order of the day when it came to the pictures upon the wall – all of this shared space with exposed cabling and plenty of UCD class photos too, we were surprised to see that the pub retained its ties to the university, which moved from what is now The National Concert Hall many years ago.

We should note, however, that there are a number of redeeming features to be considered too – most of them being on the exterior. Stained glass windows at the front of the pub are certainly a conversation piece. The four of them bear a letter each – T J L L – the meaning of which we ultimately forgot to ask the barman about. Along with these, the façade also boasts a fine example of some traditional signwriting – the name of the pub being unambiguously displayed in beautiful gold leaf lettering. And then there is some interesting wrought style ironwork which makes up a gate that guards the front door. Bearing the letter’s A and M, a quick bit of research would inform an educated guess that these are the initials of the pub’s long-serving former publican – Alfie Mulligan, whose full name once adorned the neighbouring pub.

The pint didn’t warrant too much complaining and came in at €5.10, a figure we all agreed was a good one, given the pub’s central location. The barman that poured said pint seemed a sound enough lad too.

Hartigan’s is not a pub that I ever envisaged us having much to say about – certainly not this much. It’s not a boozer with a vibe to our particular liking, but it would be ignorant for us not to tip our hat to the brazen manner in which it sits in comparative dereliction to some of the relics of the Celtic Tiger in its immediate vicinity. And while it may always be a pub that is synonymous with the infamy that comes with (alleged) political corruption, there’s no denying that it is one of the great Dublin boozers of old. And no (alleged) money-hungry bastard will ever take that away from the place! … Allegedly.