It’s probably fair enough on our part to assume that the word ‘hut’, when considered by all those included in the English-speaking world, will elicit images of rudimentary structures of mud, straw and/or bamboo in the mind’s eye of most. But today, ladies and gentlemen, I’m here to tell you about a tiny subset of that aforementioned lingual population who, upon hearing the word ‘hut’, will come to think not of favelas or muddy Maasai camps – but will instead conjure up the thought of craic and creamy pints amidst perfectly retained Victorian grandeur. Yes, that’s right – ask anybody of a certain vintage upon the streets of Phibsborough what the word ‘hut’ means to them and they will almost certainly set out immediately to put you in the know about Phibsborough’s most beloved pub – The Hut. 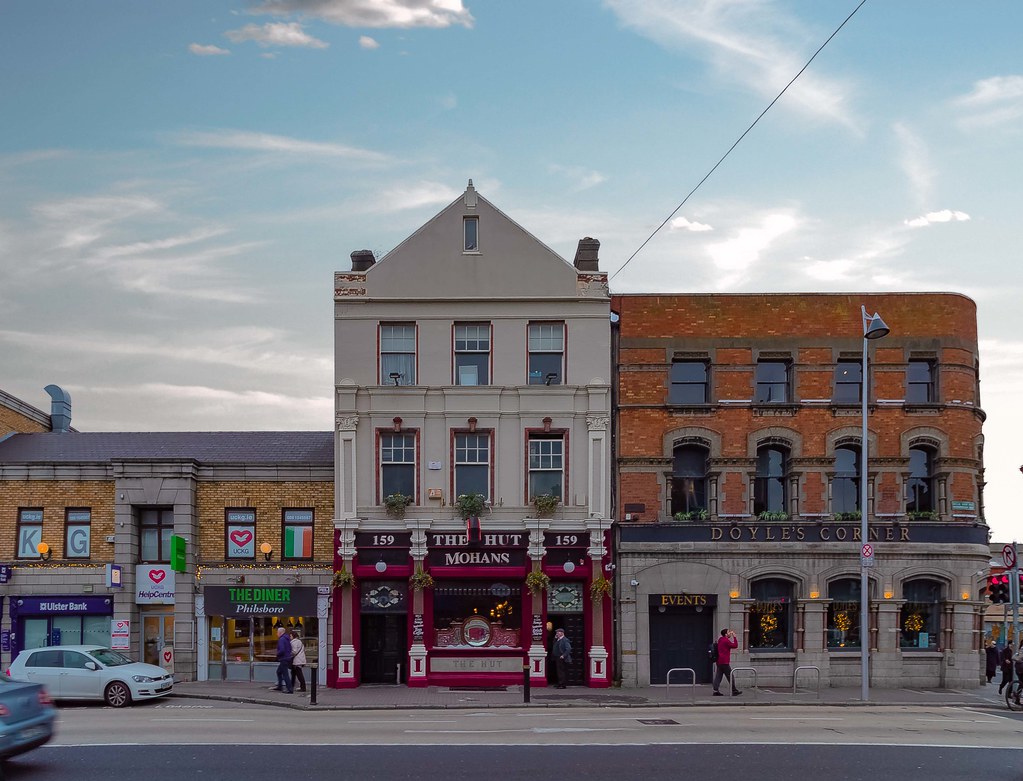 Having spent a worthwhile thirty-five minutes devouring all information that Google will provide us with on this pub it seems only appropriate that we follow suit from those who have penned their own thoughts on The Hut before us by first mentioning the name. Some say that it’s derived from hut-like structures which once provided shelter for the inhabitants of Phibsborough. Others (namely those allied to the local LOI team – Bohemians) say the name is taken from hut-like dressing rooms which used to be in situ in nearby ground, Dalymount Park. Us, we happen to think the name could be rooted in Latin given that the word ‘tavern’ is derived from the Latin word ‘taberna’ which translates to, yep you guessed it, ‘hut’.

Regardless of the provenance of the pub’s name, there is certainly no ambiguity to be encountered when it comes to its standing as one of the remaining authentic Victorian Dublin Pubs. A longer room than its well-kept façade might suggest, it ticks all the boxes regarding features of such pubs from that period – wooden dividers and partitions, stone and wooden bar-tops, gas lamps, grocer’s drawers, and my personal favourite – cask-heads incorporated into the structure of the bar – all of them well-kept and authentic; affording the pub ample parity with any of the more central and well-known Victorian watering holes dotted around the capital.

We managed to collectively get up to Phibsborough for a pint over the last few months with the full DublinByPub contingent in tow. Arriving into The Hut a few hours following nightfall (and with about 4 or 5 pints sunk too) we, or should I say our dark-adjusted and somewhat intemperate eyes, immediately found our one and only complaint with the place – the brightness. It’s needlessly bright in the evening. We wondered if it was a safety feature – one to give the cohort of Mountjoy screws, who supposedly drink in the pub, every opportunity to spot a potential aggrieved former inmate.

Seeking refuge in the more softly illuminated environs of the snug we sat down to three pints of plain and remarked on how expansive the carpeted room was. Possibly the largest snug in Dublin, we wondered? The pint itself I remember as being the best of the immediate locality – well-poured and served through the hatch of the snug it was enjoyed by all around the table with no complaint about taste or about price, coming in south of a fiver. Happy drinkers all around.

We might, if we could, go back to those thirty-five minutes of research we mentioned earlier. It was in an Irish Times article written on the subject of The Hut some years back that we happened upon an interesting quote from one of the pub’s owners – Joe Mohan. In it, he describes his position as owner of the pub, as being one which makes him responsible to ‘just mind the place’. This quote resonated with us for a few reasons, but mainly due to the fact that it was reminiscent of a sort of caretaker sentiment that we’d heard over and over again from various barmen and pub owners alike. These are people who are at the helm of the likes of The Gravedigger’s, The Swan, Fallon’s, The Palace, The Long Hall… we could go on. Do you reckon that it may just be coincidence that all of these pubs just so happen to be up there with the most renowned and regarded in all of Dublin? Because we certainly don’t!

If you happen to wind up upon the streets of Phibsborough and you find that that persistent thirst just won’t relent, we can only suggest that you drop into John and see how good a job he’s doing of minding The Hut. Maybe even ask him to dim the lights a bit for us too, will ye?