It’s early afternoon on a bitter February morning and I’m huddled around the graveside of Fenian Leader – Jeremiah O Donovan Rossa with another dozen cold persons on a guided tour of Glasnevin Cemetery. An actor in full Irish Volunteer regalia is in the throes of his re-enacting of Padraig Pearse’s famous graveside oration. The wind is whipping up in short frenzied bursts which are shaking the surrounding trees, strong trees – nourished on the since-decayed flesh of patriot dead. Haphazardly, this wind is spraying a pin-prick icy drizzle laterally toward my face, aiding it in its apparent attempt to render all exposed flesh numb.

I’m entirely sure that February is a fine month for a great number of things, but even more certain am I that Saint Brigid herself would agree that this is no optimal month for traipsing about on consecrated grounds for prolonged periods in the frost. After an hour or so the otherwise enjoyable tour ends and before I can speak the reddened faces of my companions render moot the question I have in my head. We are all in telepathic agreement that the time has come to seek shelter from the cold – and our chosen location for such is another thing that Brigid would’ve probably been agreeable to, her being the patron saint of beer, and all. We are bound for Kavanagh’s, The Gravediggers. 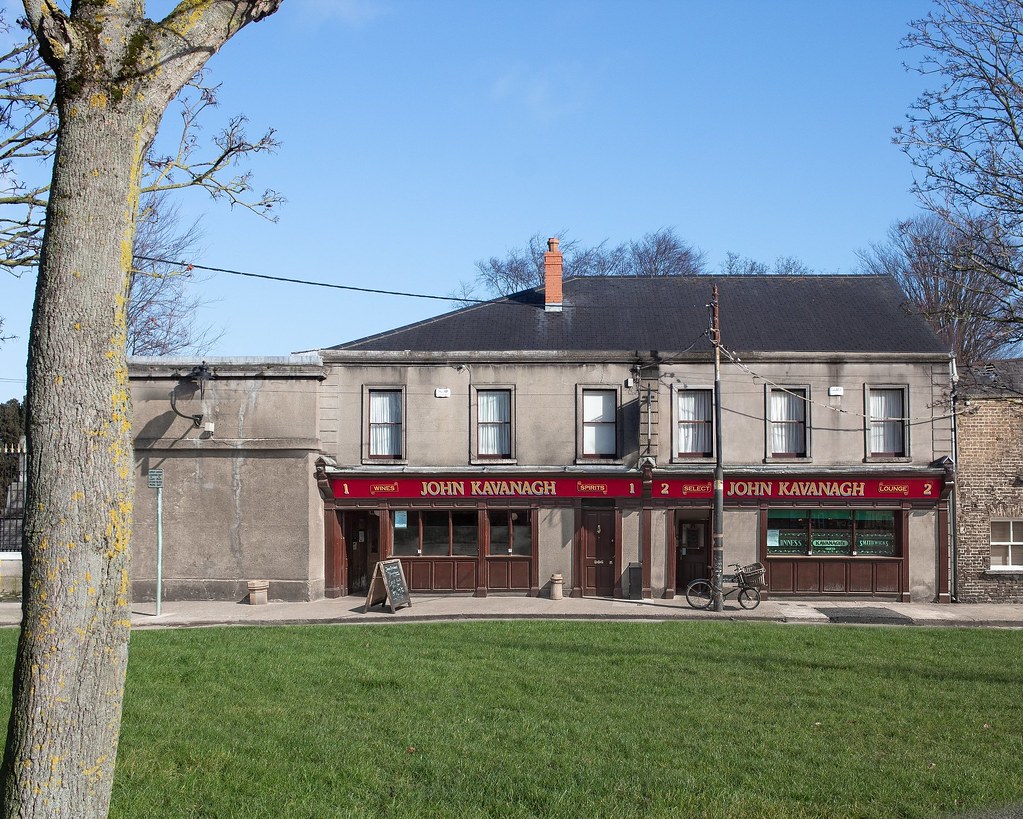 At this particular point in time our having never been to the pub is a shame we carry in secret. We fancy ourselves as knowing a thing or two about the most well-regarded pubs in Dublin and we’re repeatedly deflecting suggestions and changing subjects in order to try and conceal the awful truth. And with this comes the expectation, the hype. It’s not possible for this pub, good and all as we’re sure it will be, to live up to the standard our respective unconsciousness set for their waking counterparts. We find our way out of the cemetery and push back the heavy iron gate and proceed toward the battered wooden door. The world stops. It’s glorious.

Before long, the eight or so of us are burrowed intimately into the last remaining enclave which shier groups, similar in size, might have regarded as too small. Scatters of pints begin to arrive from the bar and arouse, in the faces of their recipients, the sort of joy you might expect to see on that of an exhausted mother postnatally cradling her new-born moments after birth.

With that, the heat has returned to our faces and the pints and conversation flow in synonymy. Outside, a mutinous streak of sunlight gasps from the grey clouds which could not conceal it, it passes through the windows at the front of the pub and works as best as it can to illuminate the pub before ultimately becoming choked out by the shade therein. And with the light and shade in battle and the joviality and expressiveness around the place you could easily convince yourself that you were inside the frame of a Vermeer or a Caravaggio, if you wanted to. .

This pub is the archetypal Dublin pub – but not just in appearance. A family run boozer with strong community ties, it’s the very essence of what a Dublin pub should be and the yardstick against which all others should be measured. This is the original model of what so many imposters unfruitfully seek to recreate for profit or for glory. To walk into the sepia-toned confines of this pub is to step squarely into the past – each feature is as characterful as the next: be it the smoke-stained ceiling, the bark chipped table or the saloon doors. There is no coincidence in the fact that the pub has been used in countless TV and movie productions to elicit a sense of days gone by.

And it’s entirely apt that the pub, which opened in 1833, is used for historical programming, as it’s dripping in lore and history. I’ll assume that everyone is already au fait with one about the afters of Luke Kelly’s funeral, and forego that for now. Even more interesting, as Luke too I’m sure would agree, is the fact that the pub and the set of customers whom gave it its name are responsible for some of the lingo that’s still commonplace in the modern lexicon. During the war, when glass was in short supply, they say that the grave diggers, weary from their work in the adjoining cemetery, would adjourn for a drink and offer up earthenware jam-jars for the purpose of being used as receptacles for their well-earned beer. From there the phrase “are ye goin’ for a jar” was born.

The pub, they say, is also responsible for the main entrance to Glasnevin Cemetery having to be relocated away from Prospect Avenue to its current one on The Finglas road. It seems that the delays resulting from mourners who couldn’t resist a liquid detour before the coffin was lowered into the soil were so bad that the only way to combat it was to build an entire new entrance.

I suppose I should get on to the pint. This is as good as it gets folks, each and every one is a showstopper and I make no hesitation in saying that this pint is the best in Dublin. This fact then, by proxy makes the pint of Guinness in The Gravediggers the best in the country, which in turn then makes it the best pint in the world. And what’s more is that it’s always charged at a fair price too, the lads could probably charge six quid a pop if they wanted to, but they won’t, the last time we managed to get up that way it was going for €4.80 a measure. A bargain!

So anyone who’s followed our ramblings for the last few years will know that we’ve been a while trying to convey our love for this pub through text. A while being measured in years in this case. I think we’ll never manage to write something that we’re 100% happy with so we’re going to convince ourselves that this one is good enough because if we don’t we’d only end up writing a full book on the pub, which I suppose we couldn’t rule out into the future either.