‘Ah there’s Barney now’ exclaimed a half drunk local sitting at the bar of The Lord Edward on a Saturday afternoon. Having heard the statement our attention was drawn to a man making his way toward the front door of the pub – the man, who was wearing a hoody coloured in a striking shade of magenta similar to that worn by the children’s television dinosaur, responded with an aggressive cluelessness – ‘What the fuck are yis on about? Barney?’ 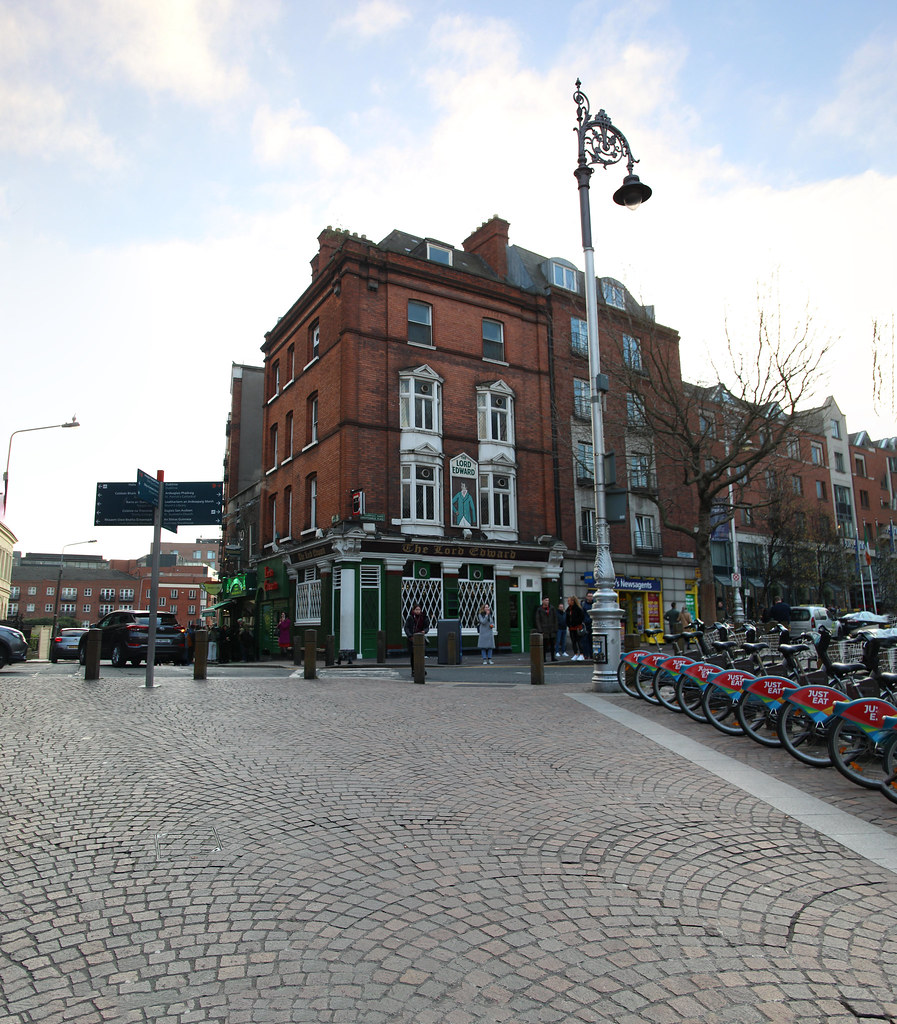 ‘Never you mind Barney’, responded another of the locals as his friend began in a chorus of ‘I Love You, You Love Me’. Instinctively the rest of the men gathered around the bar, ourselves included, joined in with the singalong. At this point the penny finally dropped for Barney – ‘Ah fuck de lotta yis’ he responded with some whimsy – a retort which was received with more laughter. Myself and Pintman №2, being in the closest proximity to Barney joined in on the laughter too – this prompted him to change his disposition from that of a whimsical one to an aggressive seriousness delivered with a brand of abruptness that would easily befit Joe Pesci. Enquiring as to what the fuck me and Pintman №2 were laughing at, Barney left just enough momentary discomfort before relaxing us with his return to whimsy once again. We resumed our laughter as he finally exited for his smoke and having remarked amongst ourselves that people would pay good money to see such a scene in The Abbey or The Gate, we continued laughing well beyond the time the man had returned.

This is The Lord Edward! Our most beloved Dublin watering hole – sitting across from Christchurch Cathedral in the heart of Dublin’s historical Viking quarter, we would argue that this is one of the last great unspoilt Dublin Boozers. Now when we say spoilt, we don’t mean destroyed – but it’s fair to say that a pub or two around town can be described as victims of their own popularity when peak times roll around. Here in The Lord Edward there are no t-shirts for sale behind the bar and the pint (which is as good, if not better, when compared to the likes of your Mulligans and your Palaces) is modestly priced, containing no added popularity tax.

You can find a good variation of demographics in here on most days and have all sorts of experiences too. Given this and the multifaceted nature of the man whose name it bears I’d tend to argue that this is a well named pub. Only recently did my curiosity pique to such a level that I actually set about finding out exactly who Lord Edward was and let me tell you – Lord Eddy Fitzgerald was some boyo for one boyo! Born into a well ranked family, he would go on to undertake a few occupations during his lifetime and earn himself the titles of soldier, explorer, parliamentarian and ultimately a revolutionary aligned with the United Irishmen in the late 1700s. A sound aul skin altogether.

The pub’s overall look is afforded by dark wood and a regal shade of green which covers some of the walls and the linoleum and carpet flooring – the lino sits to the front of the pub and the carpet being further in. Wooden dividers mark defined sections from one another and a horseshoe bar allows the staff to serve the entire bar with relative ease. The lads behind the bar themselves are about as sound as the bells that chime across the road in the cathedral – having never given us a moment’s grief or nark, maybe even when it might have been warranted after a skinful.

We had a good moment’s luck when we were in last summer. A good 12 or so of us had gathered for a few scoops with Pintman №3 who had repatriated for a few days to attend a wedding. In the midst of the craic going well the gang had begun indulging in one of their favourite pastimes, one which prior experience told us was ok in this boozer – taking me to task on my dress.

Now it may not have shone through on DublinByPub heretofore but as it turns out I’m not exactly the fashion conscious type. Given this, and the fact that I consider the act of shopping for clothes to be a form of torture that shares exclusive parity with waterboarding – I tend to end up donning some hastily chosen getups that don’t exactly break the bank.

So this particular evening the company I was keeping were deconstructing my latest t-shirt which was of the type that can be bought for €3 in a well-known budget clothes shop. The shirt followed the usual design specification set out by this company and depicted a foreign placename and an object – in this case they being Knoxville and a motorcycle. In the course of this ridicule I allowed my gaze to wander and became aware of a middle aged couple who were peering through the window and looking directly at me. Seeing an opportunity for a change of subject, I decided to beckon them in to pub with a hand gesture – an offer they immediately accepted.

Having entered the pub they moved swiftly toward our table capturing the full attention of the 12 people sat around it in the process. The woman, completely unfazed by all this, stood immediately beside me and with her broad American accent loudly enquired “What’s the deal with this Knoxville t-shirt?” Of course this particular question, at this particular time warranted laughter from everyone at the table except me, so loud was this laughter that I’d say it was heard by the poor creatures hauled up in the crypt of Christchurch across the road.

After things settled and I’d explained the concept of ‘Thanx hun, Penney’s’ to our two new pals from Knoxville, Pintman №3 insisted they settle in for a few jars – which they did. Thereafter followed a great few hours – having the chats and knocking the craic out of visitors to the city is always good fun, even more so when one of them decides to order a dozen Jemmys for the table as a final gesture before disappearing away into the night.

There wasn’t a peep out of the table about anyone’s t-shirt when sixty quid’s worth of Jameson was being thrown down the collective hatch. And when the topic of my clothing does manage to rear its ugly head I do like to remind my so-called friends how my €3 t-shirt paid for itself a literal 20 times over that night in the hope that it may quell the jeers and the slags – it doesn’t.

We couldn’t really love this pub any more if we tried. Be sure to nip in for a pint and try it out for yourself soon.

The Best 5 Pints of Guinness in Dublin City