A stone’s throw away from the relentless footfall of shoppers and buskers alike, beyond the haze of pollen that recedes to reveal the bronzed likeness of a rockstar smiling there sits a pub which purports itself to be established in 1779. The pub’s oversized frontage engulfs any passer’s view with its navy blue façade trimmed in deep red. Its painted sign simply reads: McDaids. 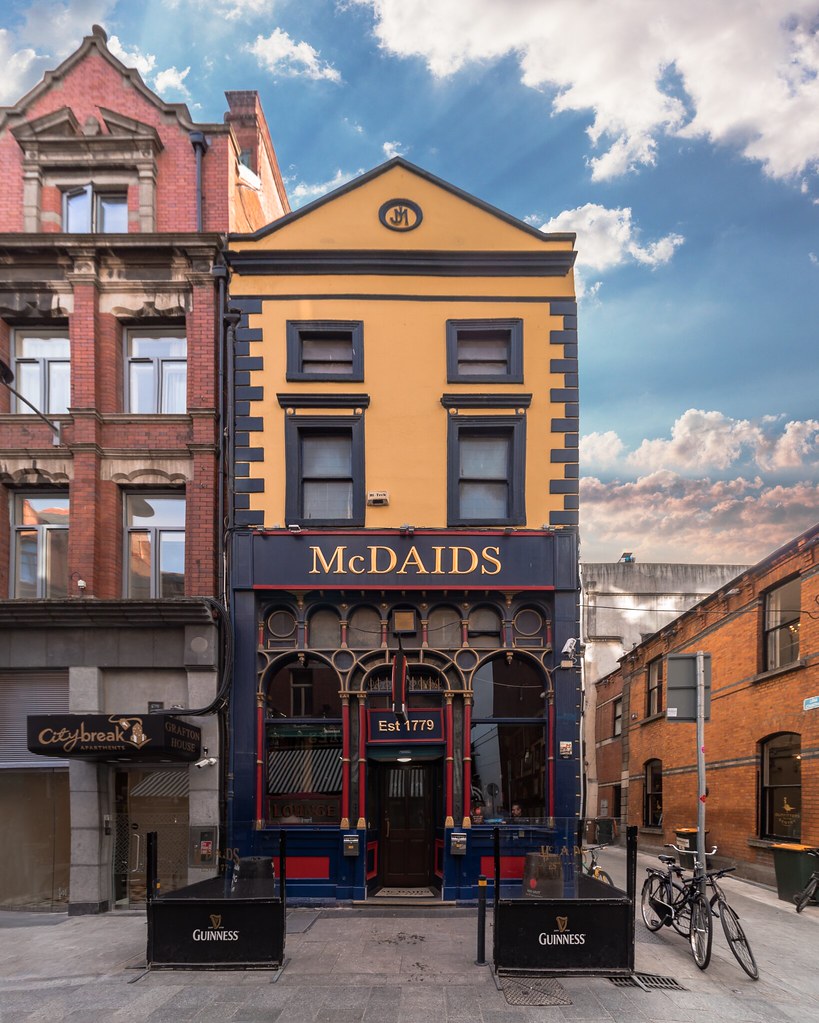 There’s no getting away from the literary heritage of this pub – which was a haunt of many of Irelands’ famous post-war writers. Patrick Kavanagh could be found here coaxing large drinks out of generous admirers by referring to his order as a “ball of malt” rather than a double whiskey. The walls of the pub serve as an instant reminder of the above – they being littered in portraits of these famous former locals.

The interior of the pub, as it appeared on a sunny early midweek afternoon is striking. The large windows to the front of the pub along with the mirrors inside afford it a great deal of illumination while the smaller stained glass windows play with the colour of the light in just the right proportions. Alike many of its contemporary locations; dark wood is the foremost building material utilised in the interior of the pub. What sets the place apart, however, is the use of green tiling upon the wood, which serves to brighten up the darkening effect of the wood. The walls are decorated with the usual pub hangings along with all the writer’s portraits.

The pint was good. Not into the superior grade of creaminess but certainly drinkable. What was harder to swallow was the price. We’re definitely beginning to see a trend in this part of D2 which is a terrible shame to be entirely honest. You’ll always need more than a fiver for a jar around here it seems. Other than the price the only other gripe is the jaxx. The trek up the stairs is somewhat annoying and trickily treacherous after a good lock of jars.

McDaid’s is another icon of Dublin’s drinking topography, a great looking boozer and in the heart of the city. It’d be rude not to drop in once in a while.