The funny thing about the pubs of Dublin is that they can easily be likened to the types of characters that inhabit the city itself. Take the likes of Mulligan’s or The Palace – I like to think of these pubs as wise elders; grandparents who dispense with worthwhile advice at the drop of a hat without prior notice. Then take the likes of your Strand Houses and your Auld Triangles. These are a bit more like the local rogues from around where you grew up. The ne’er-do-wells who people dislike but you don’t mind because they were always okay to you. 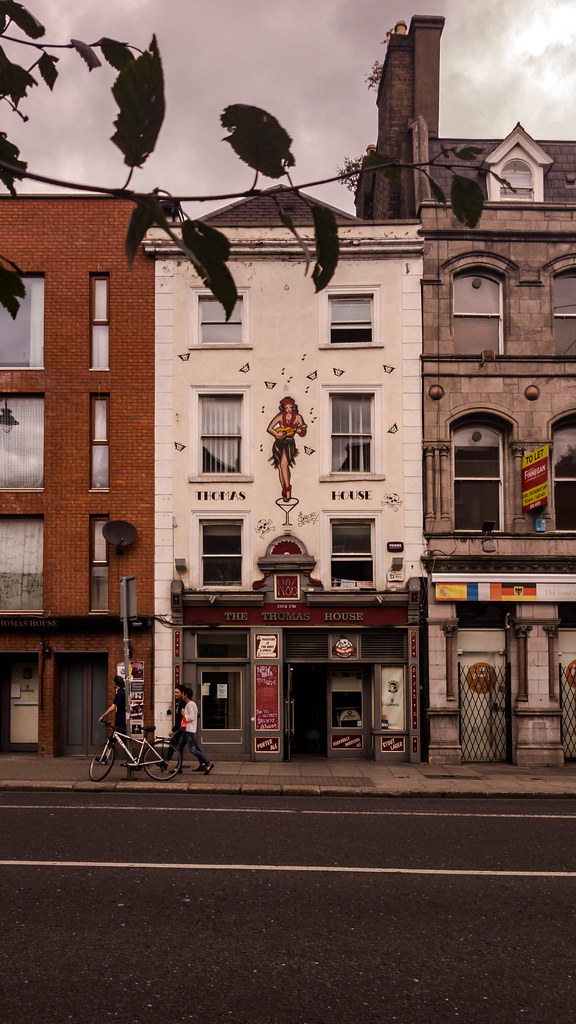 Now where does The Thomas House lay in this array of clichéd characters? Simple! This pub is your proverbial Hollywood portrayal of a cooler older brother. He has the tunes, the motorbike and the way with the ladies. He’ll stick up for you and buy you a few cans. He’s sound.

The Thomas House is a smallish rockabilly bar with neither air nor grace, Its essence is perfectly encapsulated in the fact that Morrissey (him of The Smiths) was pictured pouring a pint of the black stuff behind the bar here shortly after Guinness publicised the fact that their flagship brew had gone vegan. An act that surely brings new poignancy to the song title ‘How Soon Is Now?’
.
The pub is a hub for alternative sub-cultures, but not in a manner that disbars outsiders. Dim lighting punctuated with flourishes of neon is the luminance of choice. A large fishtank greets those who enter; following the narrow length of the bar they will find a hefty Jukebox and adjoining DJ box at the back of the room – the walls around which have been dressed with old 45s. Flags adorn the ceiling while the walls display liquor signage, music memorabilia and general rockabilly décor. The jaxx is a pokey affair and is wallpapered in comic strips for good measure.

The bar itself is no craftperson’s masterpiece but does boast an impressive array of options given its size. The Guinness is a great pour and the craft options are well picked and some of the best priced ones in the city. It may be the author’s favourite spot for a craft brew in Dublin and it’s certainly his only choice for a jar before Vicar St. Highly Recommended!

The Lamplighter: The Coombe
Scroll to top